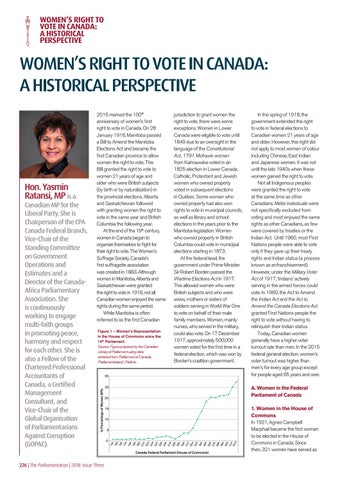 WOMEN’S RIGHT TO VOTE IN CANADA: A HISTORICAL PERSPECTIVE

WOMEN’S RIGHT TO VOTE IN CANADA: A HISTORICAL PERSPECTIVE jurisdiction to grant women the right to vote, there were some exceptions. Women in Lower Canada were eligible to vote until 1849 due to an oversight in the language of the Constitutional Act, 1791. Mohawk women from Kahnawake voted in an 1825 election in Lower Canada. Catholic, Protestant and Jewish women who owned property voted in subsequent elections in Québec. Some women who owned property had also won rights to vote in municipal councils, as well as library and school elections in the years prior to the Manitoba legislation. Women who owned property in British Columbia could vote in municipal elections starting in 1873. At the federal level, the government under Prime Minister Sir Robert Borden passed the Wartime Elections Act in 1917. This allowed women who were British subjects and who were wives, mothers or sisters of soldiers serving in World War One to vote on behalf of their male family members. Women, mainly nurses, who served in the military, could also vote. On 17 December 1917, approximately 500,000 women voted for the first time in a federal election, which was won by Borden’s coalition government.

Figure 1 – Women’s Representation in the House of Commons since the 14th Parliament. Source: Figure prepared by the Canadian Library of Parliament using data obtained from Parliament of Canada, ‘Parliamentarians’, Parlinfo. 30

In the spring of 1918, the government extended the right to vote in federal elections to Canadian women 21 years of age and older. However, this right did not apply to most women of colour including Chinese, East Indian and Japanese women. It was not until the late 1940s when these women gained the right to vote. Not all Indigenous peoples were granted the right to vote at the same time as other Canadians. Métis individuals were not specifically excluded from voting and most enjoyed the same rights as other Canadians, as few were covered by treaties or the Indian Act. Until 1960, most First Nations people were able to vote only if they gave up their treaty rights and Indian status (a process known as enfranchisement). However, under the Military Voter Act of 1917, ‘Indians’ actively serving in the armed forces could vote. In 1960, the Act to Amend the Indian Act and the Act to Amend the Canada Elections Act granted First Nations people the right to vote without having to relinquish their Indian status. Today, Canadian women generally have a higher voter turnout rate than men. In the 2015 federal general election, women’s voter turnout was higher than men’s for every age group except for people aged 65 years and over. A. Women in the Federal Parliament of Canada

Canadian MP for the Liberal Party. She is Chairperson of the CPA Canada Federal Branch, Vice-Chair of the Standing Committee on Government Operations and Estimates and a Director of the CanadaAfrica Parliamentary Association. She is continuously working to engage multi-faith groups in promoting peace, harmony and respect for each other. She is also a Fellow of the Chartered Professional Accountants of Canada, a Certified Management Consultant, and Vice-Chair of the Global Organization of Parliamentarians Against Corruption (GOPAC).

Hon. Yasmin Ratansi, MP is a

2016 marked the 100th anniversary of women’s first right to vote in Canada. On 28 January 1916, Manitoba passed a Bill to Amend the Manitoba Elections Act and became the first Canadian province to allow women the right to vote. This Bill granted the right to vote to women 21 years of age and older who were British subjects (by birth or by naturalization) in the provincial elections. Alberta and Saskatchewan followed with granting women the right to vote in the same year and British Columbia the following year. At the end of the 19th century, women in Canada began to organize themselves to fight for their right to vote. The Women’s Suffrage Society, Canada’s first suffragette association was created in 1883. Although women in Manitoba, Alberta and Saskatchewan were granted the right to vote in 1916, not all Canadian women enjoyed the same rights during the same period. While Manitoba is often referred to as the first Canadian