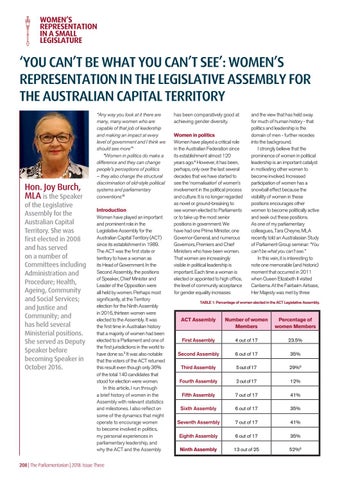 WOMEN’S REPRESENTATION IN A SMALL LEGISLATURE

‘YOU CAN’T BE WHAT YOU CAN’T SEE’: WOMEN’S REPRESENTATION IN THE LEGISLATIVE ASSEMBLY FOR THE AUSTRALIAN CAPITAL TERRITORY

of the Legislative Assembly for the Australian Capital Territory. She was first elected in 2008 and has served on a number of Committees including Administration and Procedure; Health, Ageing, Community and Social Services; and Justice and Community; and has held several Ministerial positions. She served as Deputy Speaker before becoming Speaker in October 2016.

“Any way you look at it there are many, many women who are capable of that job of leadership and making an impact at every level of government and I think we should see more”1 “Women in politics do make a difference and they can change people’s perceptions of politics – they also change the structural discrimination of old-style political systems and parliamentary conventions”2 Introduction Women have played an important and prominent role in the Legislative Assembly for the Australian Capital Territory (ACT) since its establishment in 1989. The ACT was the first state or territory to have a woman as its Head of Government. In the Second Assembly, the positions of Speaker, Chief Minister and Leader of the Opposition were all held by women. Perhaps most significantly, at the Territory election for the Ninth Assembly in 2016, thirteen women were elected to the Assembly. It was the first time in Australian history that a majority of women had been elected to a Parliament and one of the first jurisdictions in the world to have done so.3 It was also notable that the voters of the ACT returned this result even though only 36% of the total 140 candidates that stood for election were women. In this article, I run through a brief history of women in the Assembly with relevant statistics and milestones. I also reflect on some of the dynamics that might operate to encourage women to become involved in politics, my personal experiences in parliamentary leadership, and why the ACT and the Assembly

has been comparatively good at achieving gender diversity. Women in politics Women have played a critical role in the Australian Federation since its establishment almost 120 years ago.4 However, it has been, perhaps, only over the last several decades that we have started to see the ‘normalisation’ of women’s involvement in the political process and culture. It is no longer regarded as novel or ground-breaking to see women elected to Parliaments or to take up the most senior positions in government. We have had one Prime Minister, one Governor-General, and numerous Governors, Premiers and Chief Ministers who have been women. That women are increasingly visible in political leadership is important. Each time a woman is elected or appointed to high office, the level of community acceptance for gender equality increases

and the view that has held sway for much of human history - that politics and leadership is the domain of men - further recedes into the background. I strongly believe that the prominence of women in political leadership is an important catalyst in motivating other women to become involved. Increased participation of women has a snowball effect because the visibility of women in these positions encourages other women to become politically active and seek out these positions. As one of my parliamentary colleagues, Tara Cheyne, MLA recently told an Australasian Study of Parliament Group seminar: “You can’t be what you can’t see.” In this vein, it is interesting to note one memorable (and historic) moment that occurred in 2011 when Queen Elizabeth II visited Canberra. At the Fairbairn Airbase, Her Majesty was met by three

TABLE 1: Percentage of women elected in the ACT Legislative Assembly.