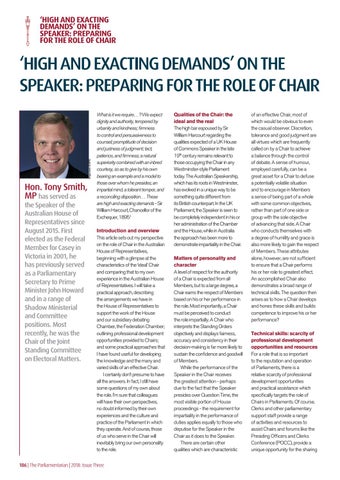 ‘HIGH AND EXACTING DEMANDS’ ON THE SPEAKER: PREPARING FOR THE ROLE OF CHAIR

‘HIGH AND EXACTING DEMANDS’ ON THE SPEAKER: PREPARING FOR THE ROLE OF CHAIR

Hon. Tony Smith, MP has served as the Speaker of the Australian House of Representatives since August 2015. First elected as the Federal Member for Casey in Victoria in 2001, he has previously served as a Parliamentary Secretary to Prime Minister John Howard and in a range of Shadow Ministerial and Committee positions. Most recently, he was the Chair of the Joint Standing Committee on Electoral Matters.

What is it we require…? We expect dignity and authority, tempered by urbanity and kindness; firmness to control and persuasiveness to counsel; promptitude of decision and justness of judgment; tact, patience, and firmness; a natural superiority combined with an inbred courtesy, so as to give by his own bearing an example and a model to those over whom he presides; an impartial mind, a tolerant temper, and a reconciling disposition… These are high and exacting demands - Sir William Harcourt, Chancellor of the Exchequer, 18951 Introduction and overview This article sets out my perspective on the role of Chair in the Australian House of Representatives, beginning with a glimpse at the characteristics of the ‘ideal’ Chair and comparing that to my own experience in the Australian House of Representatives. I will take a practical approach, describing the arrangements we have in the House of Representatives to support the work of the House and our subsidiary debating Chamber, the Federation Chamber; outlining professional development opportunities provided to Chairs; and some practical approaches that I have found useful for developing the knowledge and the many and varied skills of an effective Chair. I certainly don’t presume to have all the answers. In fact, I still have some questions of my own about the role. I’m sure that colleagues will have their own perspectives, no doubt informed by their own experiences and the culture and practice of the Parliament in which they operate. And of course, those of us who serve in the Chair will inevitably bring our own personality to the role.

Qualities of the Chair: the ideal and the real The high bar espoused by Sir William Harcourt regarding the qualities expected of a UK House of Commons Speaker in the late 19th century remains relevant to those occupying the Chair in any Westminster-style Parliament today. The Australian Speakership, which has its roots in Westminster, has evolved in a unique way to be something quite different from its British counterpart. In the UK Parliament, the Speaker is seen to be completely independent in his or her administration of the Chamber and the House, while in Australia the approach has been more to demonstrate impartiality in the Chair. Matters of personality and character A level of respect for the authority of a Chair is expected from all Members, but to a large degree, a Chair earns the respect of Members based on his or her performance in the role. Most importantly, a Chair must be perceived to conduct the role impartially. A Chair who interprets the Standing Orders objectively and displays fairness, accuracy and consistency in their decision-making is far more likely to sustain the confidence and goodwill of Members. While the performance of the Speaker in the Chair receives the greatest attention - perhaps due to the fact that the Speaker presides over Question Time, the most visible portion of House proceedings - the requirement for impartiality in the performance of duties applies equally to those who deputise for the Speaker in the Chair as it does to the Speaker. There are certain other qualities which are characteristic

of an effective Chair, most of which would be obvious to even the casual observer. Discretion, tolerance and good judgment are all virtues which are frequently called on by a Chair to achieve a balance through the control of debate. A sense of humour, employed carefully, can be a great asset for a Chair to defuse a potentially volatile situation and to encourage in Members a sense of being part of a whole with some common objectives, rather than part of one side or group with the sole objective of advancing that side. A Chair who conducts themselves with a degree of humility and grace is also more likely to gain the respect of Members. These attributes alone, however, are not sufficient to ensure that a Chair performs his or her role to greatest effect. An accomplished Chair also demonstrates a broad range of technical skills. The question then arises as to how a Chair develops and hones these skills and builds competence to improve his or her performance? Technical skills: scarcity of professional development opportunities and resources For a role that is so important to the reputation and operation of Parliaments, there is a relative scarcity of professional development opportunities and practical assistance which specifically targets the role of Chairs in Parliaments. Of course, Clerks and other parliamentary support staff provide a range of activities and resources to assist Chairs and forums like the Presiding Officers and Clerks Conference (POCC), provide a unique opportunity for the sharing