The Parliamentarian 2018: Issue One 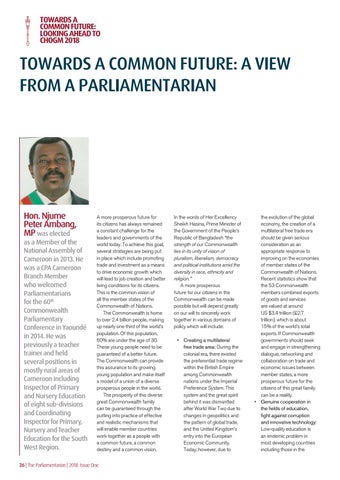 TOWARDS A COMMON FUTURE: LOOKING AHEAD TO CHOGM 2018

TOWARDS A COMMON FUTURE: A VIEW FROM A PARLIAMENTARIAN

as a Member of the National Assembly of Cameroon in 2013. He was a CPA Cameroon Branch Member who welcomed Parliamentarians for the 60th Commonwealth Parliamentary Conference in Yaoundé in 2014. He was previously a teacher trainer and held several positions in mostly rural areas of Cameroon including Inspector of Primary and Nursery Education of eight sub-divisions and Coordinating Inspector for Primary, Nursery and Teacher Education for the South West Region.

A more prosperous future for its citizens has always remained a constant challenge for the leaders and governments of the world today. To achieve this goal, several strategies are being put in place which include promoting trade and investment as a means to drive economic growth which will lead to job creation and better living conditions for its citizens. This is the common vision of all the member states of the Commonwealth of Nations. The Commonwealth is home to over 2.4 billion people, making up nearly one third of the world’s population. Of this population, 60% are under the age of 30. These young people need to be guaranteed of a better future. The Commonwealth can provide this assurance to its growing young population and make itself a model of a union of a diverse prosperous people in the world. The prosperity of this diverse great Commonwealth family can be guaranteed through the putting into practice of effective and realistic mechanisms that will enable member countries work together as a people with a common future, a common destiny and a common vision.

In the words of Her Excellency Sheikh Hasina, Prime Minister of the Government of the People’s Republic of Bangladesh “the strength of our Commonwealth lies in its unity of vision of pluralism, liberalism, democracy and political institutions amid the diversity in race, ethnicity and religion.” A more prosperous future for our citizens in the Commonwealth can be made possible but will depend greatly on our will to sincerely work together in various domains of policy which will include: • Creating a multilateral free trade area: During the colonial era, there existed the preferential trade regime within the British Empire among Commonwealth nations under the Imperial Preference System. This system and the great spirit behind it was dismantled after World War Two due to changes in geopolitics and the pattern of global trade, and the United Kingdom’s entry into the European Economic Community. Today, however, due to

the evolution of the global economy, the creation of a multilateral free trade era should be given serious consideration as an appropriate response to improving on the economies of member states of the Commonwealth of Nations. Recent statistics show that the 53 Commonwealth members combined exports of goods and services are valued at around US $3.4 trillion (£2.7 trillion), which is about 15% of the world’s total exports. If Commonwealth governments should seek and engage in strengthening dialogue, networking and collaboration on trade and economic issues between member states, a more prosperous future for the citizens of this great family can be a reality. • Genuine cooperation in the fields of education, fight against corruption and innovative technology: Low-quality education is an endemic problem in most developing countries including those in the

The Parliamentarian 2018: Issue One