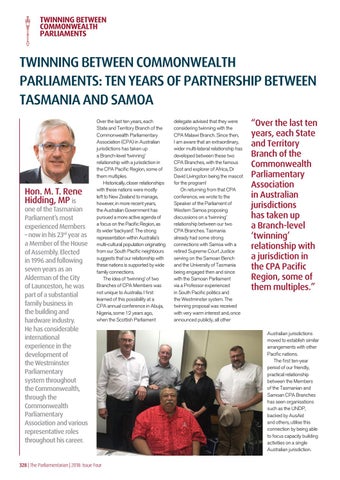 TWINNING BETWEEN COMMONWEALTH PARLIAMENTS: TEN YEARS OF PARTNERSHIP BETWEEN TASMANIA AND SAMOA

one of the Tasmanian Parliament’s most experienced Members – now in his 23rd year as a Member of the House of Assembly. Elected in 1996 and following seven years as an Alderman of the City of Launceston, he was part of a substantial family business in the building and hardware industry. He has considerable international experience in the development of the Westminster Parliamentary system throughout the Commonwealth, through the Commonwealth Parliamentary Association and various representative roles throughout his career.

Over the last ten years, each State and Territory Branch of the Commonwealth Parliamentary Association (CPA) in Australian jurisdictions has taken up a Branch-level ‘twinning’ relationship with a jurisdiction in the CPA Pacific Region, some of them multiples. Historically, closer relationships with these nations were mostly left to New Zealand to manage, however, in more recent years, the Australian Government has pursued a more active agenda of a focus on the Pacific Region, as its wider ‘backyard’. The strong representation within Australia’s multi-cultural population originating from our South Pacific neighbours suggests that our relationship with these nations is supported by wide family connections. The idea of ‘twinning’ of two Branches of CPA Members was not unique to Australia. I first learned of this possibility at a CPA annual conference in Abuja, Nigeria, some 12 years ago, when the Scottish Parliament

delegate advised that they were considering twinning with the CPA Malawi Branch. Since then, I am aware that an extraordinary, wider multi-lateral relationship has developed between these two CPA Branches, with the famous Scot and explorer of Africa, Dr David Livingston being the mascot for the program! On returning from that CPA conference, we wrote to the Speaker of the Parliament of Western Samoa proposing discussions on a ‘twinning’ relationship between our two CPA Branches. Tasmania already had some strong connections with Samoa with a retired Supreme Court Justice serving on the Samoan Bench and the University of Tasmania being engaged then and since with the Samoan Parliament via a Professor experienced in South Pacific politics and the Westminster system. The twinning proposal was received with very warm interest and, once announced publicly, all other

“Over the last ten years, each State and Territory Branch of the Commonwealth Parliamentary Association in Australian jurisdictions has taken up a Branch-level ‘twinning’ relationship with a jurisdiction in the CPA Pacific Region, some of them multiples.”

Australian jurisdictions moved to establish similar arrangements with other Pacific nations. The first ten-year period of our friendly, practical relationship between the Members of the Tasmanian and Samoan CPA Branches has seen organisations such as the UNDP, backed by AusAid and others, utilise this connection by being able to focus capacity building activities on a single Australian jurisdiction.

This special issue of The Parliamentarian focuses on human rights in the modern era and celebrates the 70th anniversary of the Universal Dec...

This special issue of The Parliamentarian focuses on human rights in the modern era and celebrates the 70th anniversary of the Universal Dec...