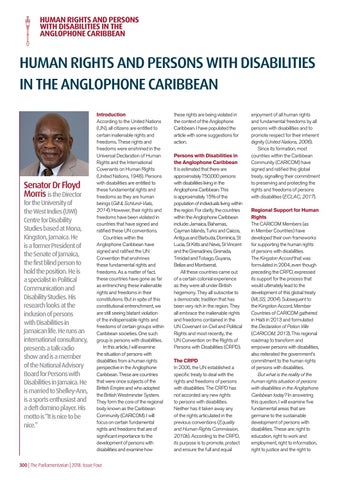 HUMAN RIGHTS AND PERSONS WITH DISABILITIES IN THE ANGLOPHONE CARIBBEAN

HUMAN RIGHTS AND PERSONS WITH DISABILITIES IN THE ANGLOPHONE CARIBBEAN

for the University of the West Indies (UWI) Centre for Disability Studies based at Mona, Kingston, Jamaica. He is a former President of the Senate of Jamaica, the first blind person to hold the position. He is a specialist in Political Communication and Disability Studies. His research looks at the inclusion of persons with Disabilities in Jamaican life. He runs an international consultancy, presents a talk radio show and is a member of the National Advisory Board for Persons with Disabilities in Jamaica. He is married to Shelley-Ann, is a sports enthusiast and a deft domino player. His motto is“It is nice to be nice.”

these rights are being violated in the context of the Anglophone Caribbean. I have populated the article with some suggestions for action. Persons with Disabilities in the Anglophone Caribbean It is estimated that there are approximately 750,000 persons with disabilities living in the Anglophone Caribbean. This is approximately 15% of the population of individuals living within the region. For clarity, the countries within the Anglophone Caribbean include: Jamaica, Bahamas, Cayman Islands, Turks and Caicos, Antigua and Barbuda, Dominica, St Lucia, St Kitts and Nevis, St Vincent and the Grenadines, Grenada, Trinidad and Tobago, Guyana, Belize and Montserrat. All these countries came out of a certain colonial experience as they were all under British hegemony. They all subscribe to a democratic tradition that has been very rich in the region. They all embrace the inalienable rights and freedoms contained in the UN Covenant on Civil and Political Rights and most recently, the UN Convention on the Rights of Persons with Disabilities (CRPD). The CRPD In 2006, the UN established a specific treaty to deal with the rights and freedoms of persons with disabilities. The CRPD has not accorded any new rights to persons with disabilities. Neither has it taken away any of the rights articulated in the previous conventions (Equality and Human Rights Commission, 2010b). According to the CRPD, its purpose is to promote, protect and ensure the full and equal