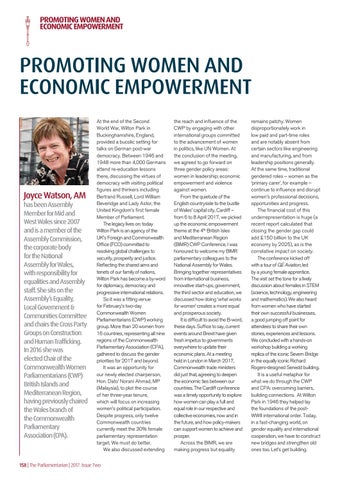 has been Assembly Member for Mid and West Wales since 2007 and is a member of the Assembly Commission, the corporate body for the National Assembly for Wales, with responsibility for equalities and Assembly staff. She sits on the Assembly’s Equality, Local Government & Communities Committee and chairs the Cross Party Groups on Construction and Human Trafficking. In 2016 she was elected Chair of the Commonwealth Women Parliamentarians (CWP) British Islands and Mediterranean Region, having previously chaired the Wales branch of the Commonwealth Parliamentary Association (CPA).

At the end of the Second World War, Wilton Park in Buckinghamshire, England, provided a bucolic setting for talks on German post-war democracy. Between 1946 and 1948 more than 4,000 Germans attend re-education lessons there, discussing the virtues of democracy with visiting political figures and thinkers including Bertrand Russell, Lord William Beveridge and Lady Astor, the United Kingdom’s first female Member of Parliament. The legacy lives on: today Wilton Park is an agency of the UK’s Foreign and Commonwealth Office (FCO) committed to resolving global challenges to security, prosperity and justice. Reflecting the shared aims and tenets of our family of nations, Wilton Park has become a by-word for diplomacy, democracy and progressive international relations. So it was a fitting venue for February’s two-day Commonwealth Women Parliamentarians (CWP) working group. More than 20 women from 16 countries, representing all nine regions of the Commonwealth Parliamentary Association (CPA), gathered to discuss the gender priorities for 2017 and beyond. It was an opportunity for our newly elected chairperson, Hon. Dato’ Norani Ahmad, MP (Malaysia), to plot the course of her three-year tenure, which will focus on increasing women’s political participation. Despite progress, only twelve Commonwealth countries currently meet the 30% female parliamentary representation target. We must do better. We also discussed extending

the reach and influence of the CWP by engaging with other international groups committed to the advancement of women in politics, like UN Women. At the conclusion of the meeting, we agreed to go forward on three gender policy areas: women in leadership; economic empowerment and violence against women. From the quietude of the English countryside to the bustle of Wales’ capital city, Cardiff – from 6 to 8 April 2017, we picked up the economic empowerment theme at the 4th British Isles and Mediterranean Region (BIMR) CWP Conference. I was honoured to welcome my BIMR parliamentary colleagues to the National Assembly for Wales. Bringing together representatives from international business, innovative start-ups, government, the third sector and education, we discussed how doing ‘what works for women’ creates a more equal and prosperous society. It is difficult to avoid the B-word, these days. Suffice to say, current events around Brexit have given fresh impetus to governments everywhere to update their economic plans. At a meeting held in London in March 2017, Commonwealth trade ministers did just that, agreeing to deepen the economic ties between our countries. The Cardiff conference was a timely opportunity to explore how women can play a full and equal role in our respective and collective economies, now and in the future, and how policy-makers can support women to achieve and prosper. Across the BIMR, we are making progress but equality

remains patchy. Women disproportionately work in low paid and part-time roles and are notably absent from certain sectors like engineering and manufacturing, and from leadership positions generally. At the same time, traditional gendered roles – women as the ‘primary carer’, for example – continue to influence and disrupt women’s professional decisions, opportunities and progress. The financial cost of this underrepresentation is huge (a recent report calculated that closing the gender gap could add £150 billion to the UK economy by 2025), as is the correlative impact on society. The conference kicked off with a tour of GE Aviation, led by a young female apprentice. The visit set the tone for a lively discussion about females in STEM (science, technology, engineering and mathematics). We also heard from women who have started their own successful businesses, a good jumping off point for attendees to share their own stories, experiences and lessons. We concluded with a hands-on workshop building a working replica of the iconic Severn Bridge in the equally iconic Richard Rogers-designed Senedd building. It is a useful metaphor for what we do through the CWP and CPA: overcoming barriers, building connections. At Wilton Park in 1946 they helped lay the foundations of the postWWII international order. Today, in a fast-changing world, on gender equality and international cooperation, we have to construct new bridges and strengthen old ones too. Let’s get building.