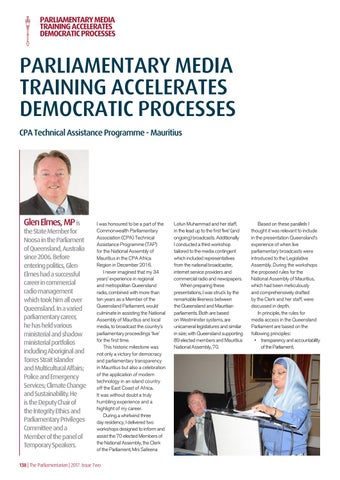 the State Member for Noosa in the Parliament of Queensland, Australia since 2006. Before entering politics, Glen Elmes had a successful career in commercial radio management which took him all over Queensland. In a varied parliamentary career, he has held various ministerial and shadow ministerial portfolios including Aboriginal and Torres Strait Islander and Multicultural Affairs; Police and Emergency Services; Climate Change and Sustainability. He is the Deputy Chair of the Integrity Ethics and Parliamentary Privileges Committee and a Member of the panel of Temporary Speakers.

I was honoured to be a part of the Commonwealth Parliamentary Association (CPA) Technical Assistance Programme (TAP) for the National Assembly of Mauritius in the CPA Africa Region in December 2016. I never imagined that my 34 years’ experience in regional and metropolitan Queensland radio, combined with more than ten years as a Member of the Queensland Parliament, would culminate in assisting the National Assembly of Mauritius and local media, to broadcast the country’s parliamentary proceedings ‘live’ for the first time. This historic milestone was not only a victory for democracy and parliamentary transparency in Mauritius but also a celebration of the application of modern technology in an island country off the East Coast of Africa. It was without doubt a truly humbling experience and a highlight of my career. During a whirlwind three day residency, I delivered two workshops designed to inform and assist the 70 elected Members of the National Assembly, the Clerk of the Parliament, Mrs Safeena

Lotun Muhammad and her staff, in the lead up to the first ‘live’ (and ongoing) broadcasts. Additionally I conducted a third workshop tailored to the media contingent which included representatives from the national broadcaster, internet service providers and commercial radio and newspapers. When preparing these presentations, I was struck by the remarkable likeness between the Queensland and Mauritian parliaments. Both are based on Westminster systems, are unicameral legislatures and similar in size; with Queensland supporting 89 elected members and Mauritius National Assembly, 70.

Based on these parallels I thought it was relevant to include in the presentation Queensland’s experience of when live parliamentary broadcasts were introduced to the Legislative Assembly. During the workshops the proposed rules for the National Assembly of Mauritius, which had been meticulously and comprehensively drafted by the Clerk and her staff, were discussed in depth. In principle, the rules for media access in the Queensland Parliament are based on the following principles: • transparency and accountability of the Parliament;