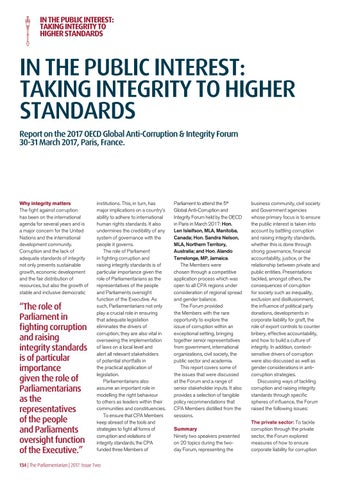 IN THE PUBLIC INTEREST: TAKING INTEGRITY TO HIGHER STANDARDS

Why integrity matters The fight against corruption has been on the international agenda for several years and is a major concern for the United Nations and the international development community. Corruption and the lack of adequate standards of integrity not only prevents sustainable growth, economic development and the fair distribution of resources, but also the growth of stable and inclusive democratic

institutions. This, in turn, has major implications on a country’s ability to adhere to international human rights standards. It also undermines the credibility of any system of governance with the people it governs. The role of Parliament in fighting corruption and raising integrity standards is of particular importance given the role of Parliamentarians as the representatives of the people and Parliaments oversight function of the Executive. As such, Parliamentarians not only play a crucial role in ensuring that adequate legislation eliminates the drivers of corruption; they are also vital in overseeing the implementation of laws on a local level and alert all relevant stakeholders of potential shortfalls in the practical application of legislation. Parliamentarians also assume an important role in modelling the right behaviour to others as leaders within their communities and constituencies. To ensure that CPA Members keep abreast of the tools and strategies to fight all forms of corruption and violations of integrity standards, the CPA funded three Members of

Parliament to attend the 5th Global Anti-Corruption and Integrity Forum held by the OECD in Paris in March 2017: Hon. Len Isleifson, MLA, Manitoba, Canada; Hon. Sandra Nelson, MLA, Northern Territory, Australia; and Hon. Alando Terrelonge, MP, Jamaica. The Members were chosen through a competitive application process which was open to all CPA regions under consideration of regional spread and gender balance. The Forum provided the Members with the rare opportunity to explore the issue of corruption within an exceptional setting, bringing together senior representatives from government, international organizations, civil society, the public sector and academia. This report covers some of the issues that were discussed at the Forum and a range of senior stakeholder inputs. It also provides a selection of tangible policy recommendations that CPA Members distilled from the sessions. Summary Ninety two speakers presented on 20 topics during the twoday Forum, representing the

business community, civil society and Government agencies whose primary focus is to ensure the public interest is taken into account by battling corruption and raising integrity standards, whether this is done through strong governance, financial accountability, justice, or the relationship between private and public entities. Presentations tackled, amongst others, the consequences of corruption for society such as inequality, exclusion and disillusionment, the influence of political party donations, developments in corporate liability for graft, the role of export controls to counter bribery, effective accountability, and how to build a culture of integrity. In addition, contextsensitive drivers of corruption were also discussed as well as gender considerations in anticorruption strategies. Discussing ways of tackling corruption and raising integrity standards through specific spheres of influence, the Forum raised the following issues: The private sector: To tackle corruption through the private sector, the Forum explored measures of how to ensure corporate liability for corruption