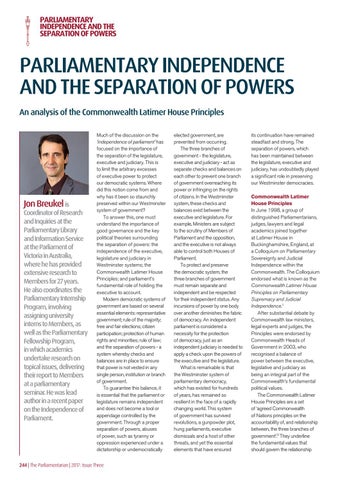 PARLIAMENTARY INDEPENDENCE AND THE SEPARATION OF POWERS

Much of the discussion on the ‘independence of parliament’ has focused on the importance of the separation of the legislature, executive and judiciary. This is to limit the arbitrary excesses of executive power to protect our democratic systems. Where did this notion come from and why has it been so staunchly preserved within our Westminster system of government? To answer this, one must understand the importance of good governance and the key political theories surrounding the separation of powers: the independence of the executive, legislature and judiciary in Westminster systems; the Commonwealth Latimer House Principles; and parliament’s fundamental role of holding the executive to account. Modern democratic systems of government are based on several essential elements: representative government; rule of the majority; free and fair elections; citizen participation; protection of human rights and minorities; rule of law; and the separation of powers - a system whereby checks and balances are in place to ensure that power is not vested in any single person, institution or branch of government. To guarantee this balance, it is essential that the parliament or legislature remains independent and does not become a tool or appendage controlled by the government. Through a proper separation of powers, abuses of power, such as tyranny or oppression experienced under a dictatorship or undemocratically

elected government, are prevented from occurring. The three branches of government - the legislature, executive and judiciary - act as separate checks and balances on each other to prevent one branch of government overreaching its power or infringing on the rights of citizens. In the Westminster system, these checks and balances exist between the executive and legislature. For example, Ministers are subject to the scrutiny of Members of Parliament and the opposition, and the executive is not always able to control both Houses of Parliament. To protect and preserve the democratic system, the three branches of government must remain separate and independent and be respected for their independent status. Any incursions of power by one body over another diminishes the fabric of democracy. An independent parliament is considered a necessity for the protection of democracy, just as an independent judiciary is needed to apply a check upon the powers of the executive and the legislature. What is remarkable is that the Westminster system of parliamentary democracy, which has existed for hundreds of years, has remained so resilient in the face of a rapidly changing world. This system of government has survived revolutions, a gunpowder plot, hung parliaments, executive dismissals and a host of other threats, and yet the essential elements that have ensured