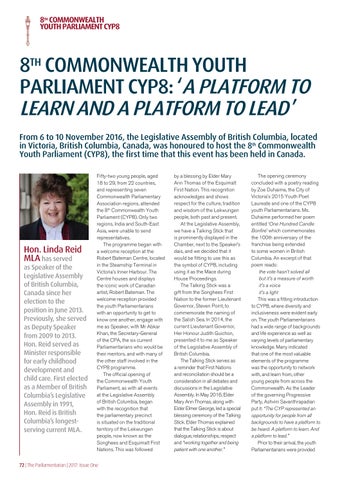 Fifty-two young people, aged 18 to 29, from 22 countries, and representing seven Commonwealth Parliamentary Association regions, attended the 8th Commonwealth Youth Parliament (CYP8). Only two regions, India and South-East Asia, were unable to send representatives. The programme began with a welcome reception at the Robert Bateman Centre, located in the Steamship Terminal in Victoria’s Inner Harbour. The Centre houses and displays the iconic work of Canadian artist, Robert Bateman. The welcome reception provided the youth Parliamentarians with an opportunity to get to know one another, engage with me as Speaker, with Mr Abkar Khan, the Secretary-General of the CPA, the six current Parliamentarians who would be their mentors, and with many of the other staff involved in the CYP8 programme. The official opening of the Commonwealth Youth Parliament, as with all events at the Legislative Assembly of British Columbia, began with the recognition that the parliamentary precinct is situated on the traditional territory of the Lekwungen people, now known as the Songhees and Esquimalt First Nations. This was followed

by a blessing by Elder Mary Ann Thomas of the Esquimalt First Nation. This recognition acknowledges and shows respect for the culture, tradition and wisdom of the Lekwungen people, both past and present. At the Legislative Assembly, we have a Talking Stick that is prominently displayed in the Chamber, next to the Speaker’s dais, and we decided that it would be fitting to use this as the symbol of CYP8, including using it as the Mace during House Proceedings. The Talking Stick was a gift from the Songhees First Nation to the former Lieutenant Governor, Steven Point, to commemorate the naming of the Salish Sea. In 2014, the current Lieutenant Governor, Her Honour Judith Guichon, presented it to me as Speaker of the Legislative Assembly of British Columbia. The Talking Stick serves as a reminder that First Nations and reconciliation should be a consideration in all debates and discussions in the Legislative Assembly. In May 2016, Elder Mary Ann Thomas, along with Elder Elmer George, led a special blessing ceremony of the Talking Stick. Elder Thomas explained that the Talking Stick is about dialogue, relationships, respect and “working together and being patient with one another.”

The opening ceremony concluded with a poetry reading by Zoe Duhaime, the City of Victoria’s 2015 Youth Poet Laureate and one of the CYP8 youth Parliamentarians. Ms. Duhaime performed her poem entitled ‘One Hundred Candle Bonfire’ which commemorates the 100th anniversary of the franchise being extended to some women in British Columbia. An excerpt of that poem reads: the vote hasn’t solved all but it’s a measure of worth it’s a voice it’s a light This was a fitting introduction to CYP8, where diversity and inclusiveness were evident early on. The youth Parliamentarians had a wide range of backgrounds and life experience as well as varying levels of parliamentary knowledge. Many indicated that one of the most valuable elements of the programme was the opportunity to network with, and learn from, other young people from across the Commonwealth. As the Leader of the governing Progressive Party, Ashvini Savanthrapadian put it: “The CYP represented an opportunity for people from all backgrounds to have a platform to be heard. A platform to learn. And a platform to lead.” Prior to their arrival, the youth Parliamentarians were provided