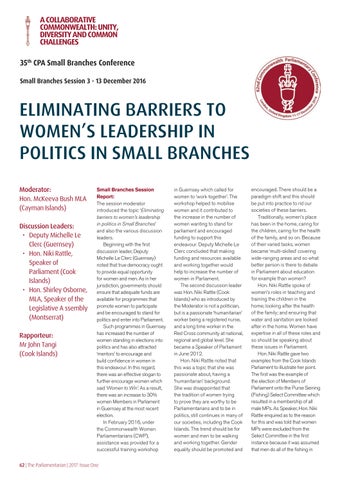 Small Branches Session Report: The session moderator introduced the topic ‘Eliminating barriers to women’s leadership in politics in Small Branches’ and also the various discussion leaders. Beginning with the first discussion leader, Deputy Michelle Le Clerc (Guernsey) noted that true democracy ought to provide equal opportunity for women and men. As in her jurisdiction, governments should ensure that adequate funds are available for programmes that promote women to participate and be encouraged to stand for politics and enter into Parliament. Such programmes in Guernsey has increased the number of women standing in elections into politics and has also attracted ‘mentors’ to encourage and build confidence in women in this endeavour. In this regard, there was an effective slogan to further encourage women which said ‘Women to Win’. As a result, there was an increase to 30% women Members in Parliament in Guernsey at the most recent election. In February 2016, under the Commonwealth Women Parliamentarians (CWP), assistance was provided for a successful training workshop

in Guernsey which called for women to ‘work together’. The workshop helped to mobilise women and it contributed to the increase in the number of women wanting to stand for parliament and encouraged funding to support this endeavour. Deputy Michelle Le Clerc concluded that making funding and resources available and working together would help to increase the number of women in Parliament. The second discussion leader was Hon. Niki Rattle (Cook Islands) who as introduced by the Moderator is not a politician, but is a passionate ‘humanitarian’ worker being a registered nurse, and a long time worker in the Red Cross community at national, regional and global level. She became a Speaker of Parliament in June 2012. Hon. Niki Rattle noted that this was a topic that she was passionate about, having a ‘humanitarian’ background. She was disappointed that the tradition of women trying to prove they are worthy to be Parliamentarians and to be in politics, still continues in many of our societies, including the Cook Islands. The trend should be for women and men to be walking and working together. Gender equality should be promoted and

encouraged. There should be a paradigm shift and this should be put into practice to rid our societies of these barriers. Traditionally, women’s place has been in the home, caring for the children, caring for the health of the family, and so on. Because of their varied tasks, women became ‘multi-skilled’ covering wide-ranging areas and so what better person is there to debate in Parliament about education for example than women? Hon. Niki Rattle spoke of women’s roles in teaching and training the children in the home; looking after the health of the family; and ensuring that water and sanitation are looked after in the home. Women have expertise in all of these roles and so should be speaking about these issues in Parliament. Hon. Niki Rattle gave two examples from the Cook Islands Parliament to illustrate her point. The first was the example of the election of Members of Parliament onto the Purse Seining (Fishing) Select Committee which resulted in a membership of all male MPs. As Speaker, Hon. Niki Rattle enquired as to the reason for this and was told that women MPs were excluded from the Select Committee in the first instance because it was assumed that men do all of the fishing in