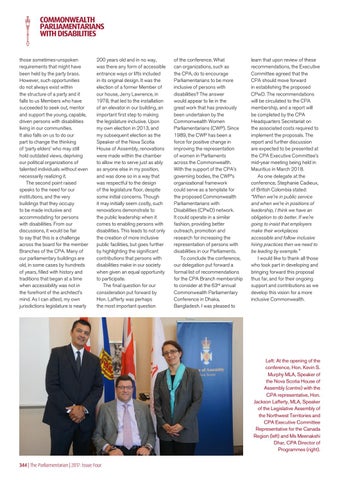 COMMONWEALTH PARLIAMENTARIANS WITH DISABILITIES those sometimes-unspoken requirements that might have been held by the party brass. However, such opportunities do not always exist within the structure of a party and it falls to us Members who have succeeded to seek out, mentor and support the young, capable, driven persons with disabilities living in our communities. It also falls on us to do our part to change the thinking of ‘party elders’ who may still hold outdated views, depriving our political organizations of talented individuals without even necessarily realizing it. The second point raised speaks to the need for our institutions, and the very buildings that they occupy to be made inclusive and accommodating for persons with disabilities. From our discussions, it would be fair to say that this is a challenge across the board for the member Branches of the CPA. Many of our parliamentary buildings are old, in some cases by hundreds of years, filled with history and traditions that began at a time when accessibility was not in the forefront of the architect’s mind. As I can attest, my own jurisdictions legislature is nearly

200 years old and in no way, was there any form of accessible entrance ways or lifts included in its original design. It was the election of a former Member of our house, Jerry Lawrence, in 1978, that led to the installation of an elevator in our building, an important first step to making the legislature inclusive. Upon my own election in 2013, and my subsequent election as the Speaker of the Nova Scotia House of Assembly, renovations were made within the chamber to allow me to serve just as ably as anyone else in my position, and was done so in a way that was respectful to the design of the legislature floor, despite some initial concerns. Though it may initially seem costly, such renovations demonstrate to the public leadership when it comes to enabling persons with disabilities. This leads to not only the creation of more inclusive public facilities, but goes further by highlighting the significant contributions that persons with disabilities make in our society when given an equal opportunity to participate. The final question for our consideration put forward by Hon. Lafferty was perhaps the most important question

of the conference. What can organizations, such as the CPA, do to encourage Parliamentarians to be more inclusive of persons with disabilities? The answer would appear to lie in the great work that has previously been undertaken by the Commonwealth Women Parliamentarians (CWP). Since 1989, the CWP has been a force for positive change in improving the representation of women in Parliaments across the Commonwealth. With the support of the CPA’s governing bodies, the CWP’s organizational framework could serve as a template for the proposed Commonwealth Parliamentarians with Disabilities (CPwD) network. It could operate in a similar fashion, providing better outreach, promotion and research for increasing the representation of persons with disabilities in our Parliaments. To conclude the conference, our delegation put forward a formal list of recommendations for the CPA Branch membership to consider at the 63rd annual Commonwealth Parliamentary Conference in Dhaka, Bangladesh. I was pleased to

learn that upon review of these recommendations, the Executive Committee agreed that the CPA should move forward in establishing the proposed CPwD. The recommendations will be circulated to the CPA membership, and a report will be completed by the CPA Headquarters Secretariat on the associated costs required to implement the proposals. The report and further discussion are expected to be presented at the CPA Executive Committee’s mid-year meeting being held in Mauritius in March 2018. As one delegate at the conference, Stephanie Cadieux, of British Colombia stated: “When we’re in public service and when we’re in positions of leadership, I think we have an obligation to do better. If we’re going to insist that employers make their workplaces accessible and follow inclusive hiring practices then we need to be leading by example.” I would like to thank all those who took part in developing and bringing forward this proposal thus far, and for their ongoing support and contributions as we develop this vision for a more inclusive Commonwealth.

Left: At the opening of the conference, Hon. Kevin S. Murphy MLA, Speaker of the Nova Scotia House of Assembly (centre) with the CPA representative, Hon. Jackson Lafferty, MLA, Speaker of the Legislative Assembly of the Northwest Territories and CPA Executive Committee Representative for the Canada Region (left) and Ms Meenakshi Dhar, CPA Director of Programmes (right). 344 | The Parliamentarian | 2017: Issue Four