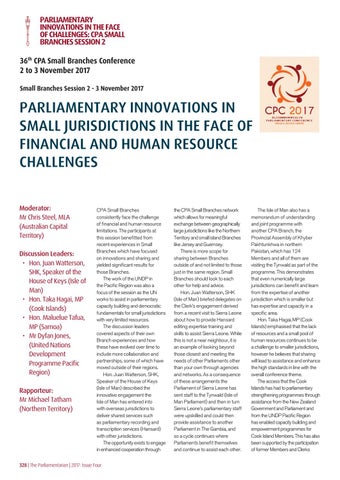 CPA Small Branches consistently face the challenge of financial and human resource limitations. The participants at this session benefitted from recent experiences in Small Branches which have focused on innovations and sharing and yielded significant results for those Branches. The work of the UNDP in the Pacific Region was also a focus of the session as the UN works to assist in parliamentary capacity building and democratic fundamentals for small jurisdictions with very limited resources. The discussion leaders covered aspects of their own Branch experiences and how these have evolved over time to include more collaboration and partnerships, some of which have moved outside of their regions. Hon. Juan Watterson, SHK, Speaker of the House of Keys (Isle of Man) described the innovative engagement the Isle of Man has entered into with overseas jurisdictions to deliver shared services such as parliamentary recording and transcription services (Hansard) with other jurisdictions. The opportunity exists to engage in enhanced cooperation through

the CPA Small Branches network which allows for meaningful exchange between geographically large jurisdictions like the Northern Territory and small island Branches like Jersey and Guernsey. There is more scope for sharing between Branches outside of and not limited to those just in the same region. Small Branches should look to each other for help and advice. Hon. Juan Watterson, SHK (Isle of Man) briefed delegates on the Clerk’s engagement derived from a recent visit to Sierra Leone about how to provide Hansard editing expertise training and skills to assist Sierra Leone. While this is not a near neighbour, it is an example of looking beyond those closest and meeting the needs of other Parliaments other than your own through agencies and networks. As a consequence of these arrangements the Parliament of Sierra Leone has sent staff to the Tynwald (Isle of Man Parliament) and then in turn Sierra Leone’s parliamentary staff were upskilled and could then provide assistance to another Parliament in The Gambia, and so a cycle continues where Parliaments benefit themselves and continue to assist each other.

The Isle of Man also has a memorandum of understanding and joint programme with another CPA Branch, the Provincial Assembly of Khyber Pakhtunkhwa in northern Pakistan, which has 124 Members and all of them are visiting the Tynwald as part of the programme. This demonstrates that even numerically large jurisdictions can benefit and learn from the expertise of another jurisdiction which is smaller but has expertise and capacity in a specific area. Hon. Taka Hagai, MP (Cook Islands) emphasised that the lack of resources and a small pool of human resources continues to be a challenge to smaller jurisdictions, however he believes that sharing will lead to assistance and enhance the high standards in line with the overall conference theme. The access that the Cook Islands has had to parliamentary strengthening programmes through assistance from the New Zealand Government and Parliament and from the UNDP Pacific Region has enabled capacity building and empowerment programmes for Cook Island Members. This has also been supported by the participation of former Members and Clerks