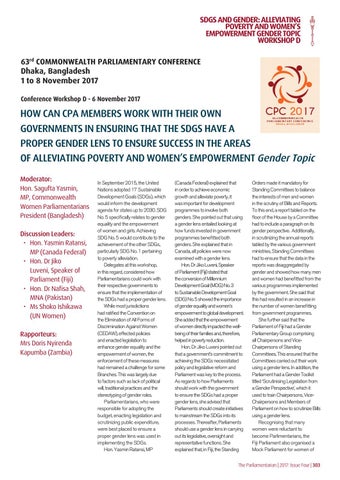 In September 2015, the United Nations adopted 17 Sustainable Development Goals (SDGs), which would inform the development agenda for states up to 2030. SDG No. 5 specifically relates to gender equality and the empowerment of women and girls. Achieving SDG No. 5 would contribute to the achievement of the other SDGs, particularly SDG No. 1 pertaining to poverty alleviation. Delegates at this workshop, in this regard, considered how Parliamentarians could work with their respective governments to ensure that the implementation of the SDGs had a proper gender lens. While most jurisdictions had ratified the Convention on the Elimination of All Forms of Discrimination Against Women (CEDAW), effected policies and enacted legislation to enhance gender equality and the empowerment of women, the enforcement of these measures had remained a challenge for some Branches. This was largely due to factors such as lack of political will, traditional practices and the stereotyping of gender roles. Parliamentarians, who were responsible for adopting the budget, enacting legislation and scrutinizing public expenditure, were best placed to ensure a proper gender lens was used in implementing the SDGs. Hon. Yasmin Ratansi, MP

(Canada Federal) explained that in order to achieve economic growth and alleviate poverty, it was important for development programmes to involve both genders. She pointed out that using a gender lens entailed looking at how funds invested in government programmes benefitted both genders. She explained that in Canada, all policies were now examined with a gender lens. Hon. Dr Jiko Luveni, Speaker of Parliament (Fiji) stated that the conversion of Millennium Development Goal (MDG) No. 3 to Sustainable Development Goal (SDG) No. 5 showed the importance of gender equality and women’s empowerment to global development. She added that the empowerment of women directly impacted the wellbeing of their families and, therefore, helped in poverty reduction. Hon. Dr Jiko Luveni pointed out that a government’s commitment to achieving the SDGs necessitated policy and legislative reform and Parliament was key to the process. As regards to how Parliaments should work with the government to ensure the SDGs had a proper gender lens, she advised that Parliaments should create initiatives to mainstream the SDGs into its processes. Thereafter, Parliaments should use a gender lens in carrying out its legislative, oversight and representative functions. She explained that, in Fiji, the Standing

Orders made it mandatory for Standing Committees to balance the interests of men and women in the scrutiny of Bills and Reports. To this end, a report tabled on the floor of the House by a Committee had to include a paragraph on its gender perspective. Additionally, in scrutinizing the annual reports tabled by the various government ministries, Standing Committees had to ensure that the data in the reports was disaggregated by gender and showed how many men and women had benefitted from the various programmes implemented by the government. She said that this had resulted in an increase in the number of women benefitting from government programmes. She further said that the Parliament of Fiji had a Gender Parliamentary Group comprising all Chairpersons and ViceChairpersons of Standing Committees. This ensured that the Committees carried out their work using a gender lens. In addition, the Parliament had a Gender Toolkit titled ‘Scrutinising Legislation from a Gender Perspective’, which it used to train Chairpersons, ViceChairpersons and Members of Parliament on how to scrutinize Bills using a gender lens. Recognising that many women were reluctant to become Parlimentarians, the Fiji Parliament also organised a Mock Parliament for women of