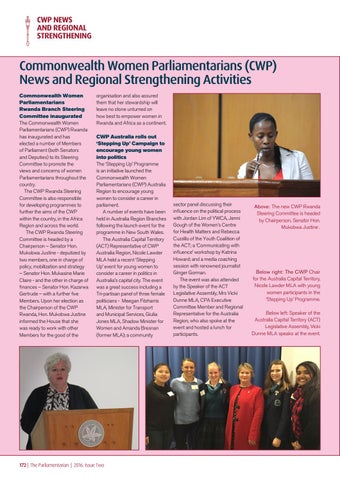 organisation and also assured them that her stewardship will leave no stone unturned on how best to empower women in Rwanda and Africa as a continent. CWP Australia rolls out ‘Stepping Up’ Campaign to encourage young women into politics The ‘Stepping Up’ Programme is an initiative launched the Commonwealth Women Parliamentarians (CWP) Australia Region to encourage young women to consider a career in parliament. A number of events have been held in Australia Region Branches following the launch event for the programme in New South Wales. The Australia Capital Territory (ACT) Representative of CWP Australia Region, Nicole Lawder MLA held a recent ‘Stepping Up’ event for young women to consider a career in politics in Australia’s capital city. The event was a great success including a Tri-partisan panel of three female politicians - Meegan Fitzharris MLA, Minister for Transport and Municipal Services, Giulia Jones MLA, Shadow Minister for Women and Amanda Bresnan (former MLA); a community

sector panel discussing their influence on the political process with Jordan Lim of YWCA, Jenni Gough of the Women’s Centre for Health Matters and Rebecca Cuzzillo of the Youth Coalition of the ACT; a ‘Communicating with influence’ workshop by Katrina Howard; and a media coaching session with renowned journalist Ginger Gorman. The event was also attended by the Speaker of the ACT Legislative Assembly, Mrs Vicki Dunne MLA, CPA Executive Committee Member and Regional Representative for the Australia Region, who also spoke at the event and hosted a lunch for participants.