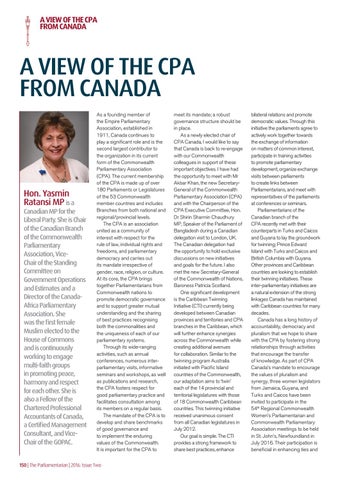 A VIEW OF THE CPA FROM CANADA

A VIEW OF THE CPA FROM CANADA

Hon. Yasmin Ratansi MP is a

Canadian MP for the Liberal Party. She is Chair of the Canadian Branch of the Commonwealth Parliamentary Association, ViceChair of the Standing Committee on Government Operations and Estimates and a Director of the CanadaAfrica Parliamentary Association. She was the first female Muslim elected to the House of Commons and is continuously working to engage multi-faith groups in promoting peace, harmony and respect for each other. She is also a Fellow of the Chartered Professional Accountants of Canada, a Certified Management Consultant, and ViceChair of the GOPAC.

As a founding member of the Empire Parliamentary Association, established in 1911, Canada continues to play a significant role and is the second largest contributor to the organization in its current form of the Commonwealth Parliamentary Association (CPA). The current membership of the CPA is made up of over 180 Parliaments or Legislatures of the 53 Commonwealth member countries and includes Branches from both national and regional/provincial levels. The CPA is an association united as a community of interest with respect for the rule of law, individual rights and freedoms, and parliamentary democracy and carries out its mandate irrespective of gender, race, religion, or culture. At its core, the CPA brings together Parliamentarians from Commonwealth nations to promote democratic governance and to support greater mutual understanding and the sharing of best practices recognising both the commonalities and the uniqueness of each of our parliamentary systems. Through its wide-ranging activities, such as annual conferences, numerous interparliamentary visits, informative seminars and workshops, as well as publications and research, the CPA fosters respect for good parliamentary practice and facilitates consultation among its members on a regular basis. The mandate of the CPA is to develop and share benchmarks of good governance and to implement the enduring values of the Commonwealth. It is important for the CPA to

meet its mandate; a robust governance structure should be in place. As a newly elected chair of CPA Canada, I would like to say that Canada is back to re-engage with our Commonwealth colleagues in support of these important objectives. I have had the opportunity to meet with Mr Akbar Khan, the new SecretaryGeneral of the Commonwealth Parliamentary Association (CPA) and with the Chairperson of the CPA Executive Committee, Hon. Dr Shirin Sharmin Chaudhury MP, Speaker of the Parliament of Bangladesh during a Canadian delegation visit to London, UK. The Canadian delegation had the opportunity to hold exclusive discussions on new initiatives and goals for the future. I also met the new Secretary-General of the Commonwealth of Nations, Baroness Patricia Scotland. One significant development is the Caribbean Twinning Initiative (CTI) currently being developed between Canadian provinces and territories and CPA branches in the Caribbean, which will further enhance synergies across the Commonwealth while creating additional avenues for collaboration. Similar to the twinning program Australia initiated with Pacific Island countries of the Commonwealth, our adaptation aims to ‘twin’ each of the 14 provincial and territorial legislatures with those of 18 Commonwealth Caribbean countries. This twinning initiative received unanimous consent from all Canadian legislatures in July 2012. Our goal is simple. The CTI provides a strong framework to share best practices, enhance

bilateral relations and promote democratic values. Through this initiative the parliaments agree to actively work together towards the exchange of information on matters of common interest, participate in training activities to promote parliamentary development, organize exchange visits between parliaments to create links between Parliamentarians, and meet with representatives of the parliaments at conferences or seminars. Parliamentarians of the Canadian branch of the CPA recently met with their counterparts in Turks and Caicos and Guyana to lay the groundwork for twinning; Prince Edward Island with Turks and Caicos and British Columbia with Guyana. Other provinces and Caribbean countries are looking to establish their twinning initiatives. These inter-parliamentary initiatives are a natural extension of the strong linkages Canada has maintained with Caribbean countries for many decades. Canada has a long history of accountability, democracy and pluralism that we hope to share with the CPA by fostering strong relationships through activities that encourage the transfer of knowledge. As part of CPA Canada’s mandate to encourage the values of pluralism and synergy, three women legislators from Jamaica, Guyana, and Turks and Caicos have been invited to participate in the 54th Regional Commonwealth Women’s Parliamentarian and Commonwealth Parliamentary Association meetings to be held in St. John’s, Newfoundland in July 2016. Their participation is beneficial in enhancing ties and