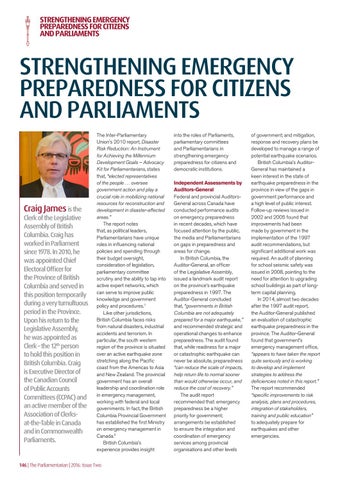 Craig James is the

Clerk of the Legislative Assembly of British Columbia. Craig has worked in Parliament since 1978. In 2010, he was appointed Chief Electoral Officer for the Province of British Columbia and served in this position temporarily during a very tumultuous period in the Province. Upon his return to the Legislative Assembly, he was appointed as Clerk – the 12th person to hold this position in British Columbia. Craig is Executive Director of the Canadian Council of Public Accounts Committees (CCPAC) and an active member of the Association of Clerksat-the-Table in Canada and in Commonwealth Parliaments.

The Inter-Parliamentary Union’s 2010 report, Disaster Risk Reduction: An Instrument for Achieving the Millennium Development Goals – Advocacy Kit for Parliamentarians, states that, “elected representatives of the people … oversee government action and play a crucial role in mobilizing national resources for reconstruction and development in disaster-affected areas.” The report notes that, as political leaders, Parliamentarians have unique roles in influencing national policies and spending through their budget oversight, consideration of legislation, parliamentary committee scrutiny and the ability to tap into active expert networks, which can serve to improve public knowledge and government policy and procedures.1 Like other jurisdictions, British Columbia faces risks from natural disasters, industrial accidents and terrorism. In particular, the south western region of the province is situated over an active earthquake zone stretching along the Pacific coast from the Americas to Asia and New Zealand. The provincial government has an overall leadership and coordination role in emergency management, working with federal and local governments. In fact, the British Columbia Provincial Government has established the first Ministry on emergency management in Canada.2 British Columbia’s experience provides insight

into the roles of Parliaments, parliamentary committees and Parliamentarians in strengthening emergency preparedness for citizens and democratic institutions. Independent Assessments by Auditors-General Federal and provincial AuditorsGeneral across Canada have conducted performance audits on emergency preparedness in recent decades, which have focused attention by the public, the media and Parliamentarians on gaps in preparedness and areas for change. In British Columbia, the Auditor-General, an officer of the Legislative Assembly, issued a landmark audit report on the province’s earthquake preparedness in 1997. The Auditor-General concluded that, “governments in British Columbia are not adequately prepared for a major earthquake,” and recommended strategic and operational changes to enhance preparedness. The audit found that, while readiness for a major or catastrophic earthquake can never be absolute, preparedness “can reduce the scale of impacts, help return life to normal sooner than would otherwise occur, and reduce the cost of recovery.” The audit report recommended that: emergency preparedness be a higher priority for government; arrangements be established to ensure the integration and coordination of emergency services among provincial organisations and other levels

of government; and mitigation, response and recovery plans be developed to manage a range of potential earthquake scenarios. British Columbia’s AuditorGeneral has maintained a keen interest in the state of earthquake preparedness in the province in view of the gaps in government performance and a high level of public interest. Follow-up reviews issued in 2002 and 2005 found that improvements had been made by government in the implementation of the 1997 audit recommendations, but significant additional work was required. An audit of planning for school seismic safety was issued in 2008, pointing to the need for attention to upgrading school buildings as part of longterm capital planning. In 2014, almost two decades after the 1997 audit report, the Auditor-General published an evaluation of catastrophic earthquake preparedness in the province. The Auditor-General found that government’s emergency management office, “appears to have taken the report quite seriously and is working to develop and implement strategies to address the deficiencies noted in this report.” The report recommended “specific improvements to risk analysis, plans and procedures, integration of stakeholders, training and public education” to adequately prepare for earthquakes and other emergencies.