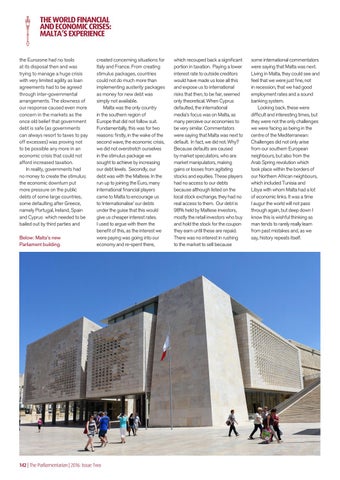 THE WORLD FINANCIAL AND ECONOMIC CRISES: MALTA’S EXPERIENCE the Eurozone had no tools at its disposal then and was trying to manage a huge crisis with very limited agility as loan agreements had to be agreed through inter-governmental arrangements. The slowness of our response caused even more concern in the markets as the once old belief that government debt is safe (as governments can always resort to taxes to pay off excesses) was proving not to be possible any more in an economic crisis that could not afford increased taxation. In reality, governments had no money to create the stimulus; the economic downturn put more pressure on the public debts of some large countries, some defaulting after Greece, namely Portugal, Ireland, Spain and Cyprus which needed to be bailed out by third parties and Below: Malta’s new Parliament building.

created concerning situations for Italy and France. From creating stimulus packages, countries could not do much more than implementing austerity packages as money for new debt was simply not available. Malta was the only country in the southern region of Europe that did not follow suit. Fundamentally, this was for two reasons: firstly, in the wake of the second wave, the economic crisis, we did not overstretch ourselves in the stimulus package we sought to achieve by increasing our debt levels. Secondly, our debt was with the Maltese. In the run up to joining the Euro, many international financial players came to Malta to encourage us to ‘internationalise’ our debts under the guise that this would give us cheaper interest rates. I used to argue with them the benefit of this, as the interest we were paying was going into our economy and re-spent there,

which recouped back a significant portion in taxation. Paying a lower interest rate to outside creditors would have made us lose all this and expose us to international risks that then, to be fair, seemed only theoretical. When Cyprus defaulted, the international media’s focus was on Malta, as many perceive our economies to be very similar. Commentators were saying that Malta was next to default. In fact, we did not. Why? Because defaults are caused by market speculators, who are market manipulators, making gains or losses from agitating stocks and equities. These players had no access to our debts because although listed on the local stock exchange, they had no real access to them. Our debt is 98% held by Maltese investors, mostly the retail investors who buy and hold the stock for the coupon they earn until these are repaid. There was no interest in rushing to the market to sell because

some international commentators were saying that Malta was next. Living in Malta, they could see and feel that we were just fine, not in recession, that we had good employment rates and a sound banking system. Looking back, these were difficult and interesting times, but they were not the only challenges we were facing as being in the centre of the Mediterranean: Challenges did not only arise from our southern European neighbours, but also from the Arab Spring revolution which took place within the borders of our Northern African neighbours, which included Tunisia and Libya with whom Malta had a lot of economic links. It was a time I augur the world will not pass through again, but deep down I know this is wishful thinking as man tends to rarely really learn from past mistakes and, as we say, history repeats itself.