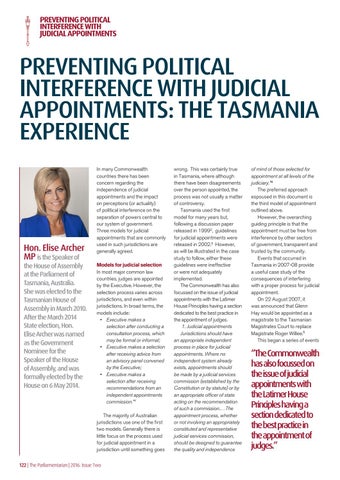 Hon. Elise Archer MP is the Speaker of

wrong. This was certainly true in Tasmania, where although there have been disagreements over the person appointed, the process was not usually a matter of controversy. Tasmania used the first model for many years but, following a discussion paper released in 19992, guidelines for judicial appointments were released in 2002.3 However, as will be illustrated in the case study to follow, either these guidelines were ineffective or were not adequately implemented. The Commonwealth has also focussed on the issue of judicial appointments with the Latimer House Principles having a section dedicated to the best practice in the appointment of judges. 1. Judicial appointments Jurisdictions should have an appropriate independent process in place for judicial appointments. Where no independent system already exists, appointments should be made by a judicial services commission (established by the Constitution or by statute) or by an appropriate officer of state acting on the recommendation of such a commission.…The appointment process, whether or not involving an appropriately constituted and representative judicial services commission, should be designed to guarantee the quality and independence

of mind of those selected for appointment at all levels of the judiciary.”4 The preferred approach espoused in this document is the third model of appointment outlined above. However, the overarching guiding principle is that the appointment must be free from interference by other sectors of government, transparent and trusted by the community. Events that occurred in Tasmania in 2007-08 provide a useful case study of the consequences of interfering with a proper process for judicial appointment. On 22 August 2007, it was announced that Glenn Hay would be appointed as a magistrate to the Tasmanian Magistrates Court to replace Magistrate Roger Willee.5 This began a series of events

“The Commonwealth has also focussed on the issue of judicial appointments with the Latimer House Principles having a section dedicated to the best practice in the appointment of judges.”