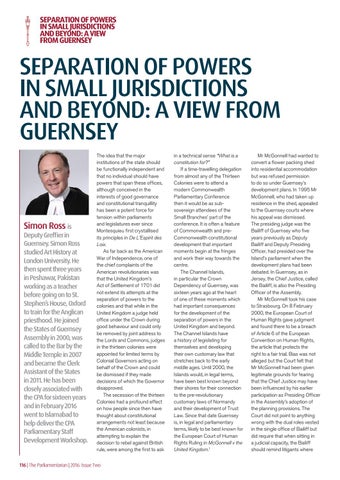 SEPARATION OF POWERS IN SMALL JURISDICTIONS AND BEYOND: A VIEW FROM GUERNSEY

SEPARATION OF POWERS IN SMALL JURISDICTIONS AND BEYOND: A VIEW FROM GUERNSEY

Deputy Greffier in Guernsey. Simon Ross studied Art History at London University. He then spent three years in Peshawar, Pakistan working as a teacher before going on to St. Stephen’s House, Oxford to train for the Anglican priesthood. He joined the States of Guernsey Assembly in 2000, was called to the Bar by the Middle Temple in 2007 and became the Clerk Assistant of the States in 2011. He has been closely associated with the CPA for sixteen years and in February 2016 went to Islamabad to help deliver the CPA Parliamentary Staff Development Workshop.

The idea that the major institutions of the state should be functionally independent and that no individual should have powers that span these offices, although conceived in the interests of good governance and constitutional tranquillity has been a potent force for tension within parliaments and legislatures ever since Montesquieu first crystallised its principles in De L’Espirit des Loix. As far back as the American War of Independence, one of the chief complaints of the American revolutionaries was that the United Kingdom’s Act of Settlement of 1701 did not extend its attempts at the separation of powers to the colonies and that while in the United Kingdom a judge held office under the Crown during good behaviour and could only be removed by joint address to the Lords and Commons, judges in the thirteen colonies were appointed for limited terms by Colonial Governors acting on behalf of the Crown and could be dismissed if they made decisions of which the Governor disapproved. The secession of the thirteen Colonies had a profound effect on how people since then have thought about constitutional arrangements not least because the American colonists, in attempting to explain the decision to rebel against British rule, were among the first to ask

in a technical sense “What is a constitution for?” If a time-travelling delegation from almost any of the Thirteen Colonies were to attend a modern Commonwealth Parliamentary Conference then it would be as subsovereign attendees of the Small Branches’ part of the conference. It is often a feature of Commonwealth and preCommonwealth constitutional development that important moments begin at the fringes and work their way towards the centre. The Channel Islands, in particular the Crown Dependency of Guernsey, was sixteen years ago at the heart of one of these moments which had important consequences for the development of the separation of powers in the United Kingdom and beyond. The Channel Islands have a history of legislating for themselves and developing their own customary law that stretches back to the early middle ages. Until 2000, the Islands would, in legal terms, have been best known beyond their shores for their connection to the pre-revolutionary customary laws of Normandy and their development of Trust Law. Since that date Guernsey is, in legal and parliamentary terms, likely to be best known for the European Court of Human Rights Ruling in McGonnell v the United Kingdom.1

Mr McGonnell had wanted to convert a flower packing shed into residential accommodation but was refused permission to do so under Guernsey’s development plans. In 1995 Mr McGonnell, who had taken up residence in the shed, appealed to the Guernsey courts where his appeal was dismissed. The presiding judge was the Bailiff of Guernsey who five years previously as Deputy Bailiff and Deputy Presiding Officer, had presided over the Island’s parliament when the development plans had been debated. In Guernsey, as in Jersey, the Chief Justice, called the Bailiff, is also the Presiding Officer of the Assembly. Mr McGonnell took his case to Strasbourg. On 8 February 2000, the European Court of Human Rights gave judgment and found there to be a breach of Article 6 of the European Convention on Human Rights, the article that protects the right to a fair trial. Bias was not alleged but the Court felt that Mr McGonnell had been given legitimate grounds for fearing that the Chief Justice may have been influenced by his earlier participation as Presiding Officer in the Assembly’s adoption of the planning provisions. The Court did not point to anything wrong with the dual roles vested in the single office of Bailiff but did require that when sitting in a judicial capacity, the Bailiff should remind litigants where