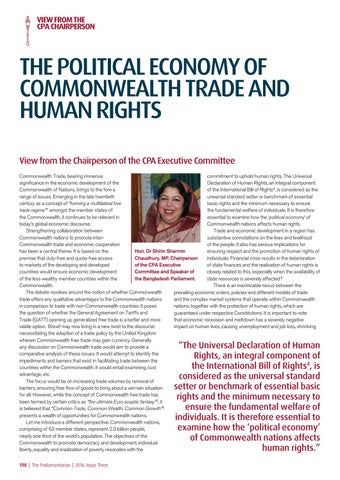 view from the CPA chairPERSON

THE POLITICAL ECONOMY OF COMMONWEALTH TRADE AND HUMAN RIGHTS View from the Chairperson of the CPA Executive Committee commitment to uphold human rights. The Universal Commonwealth Trade, bearing immense Declaration of Human Rights, an integral component significance in the economic development of the of the International Bill of Rights4, is considered as the Commonwealth of Nations, brings to the fore a range of issues. Emerging in the late twentieth universal standard setter or benchmark of essential century as a concept of “forming a multilateral free basic rights and the minimum necessary to ensure trade regime”1 amongst the member states of the fundamental welfare of individuals. It is therefore essential to examine how the ‘political economy’ of the Commonwealth, it continues to be relevant in Commonwealth nations affects human rights. today’s global economic discourse. Trade and economic development in a region has Strengthening collaboration between substantive connotations on the lives and livelihood Commonwealth nations to promote interof the people. It also has serious implications for Commonwealth trade and economic cooperation ensuring respect and the promotion of human rights of has been a central theme. It is based on the Hon. Dr Shirin Sharmin individuals. Financial crisis results in the deterioration premise that duty-free and quota-free access Chaudhury, MP, Chairperson of state finances and the realisation of human rights is to markets of the developing and developed of the CPA Executive closely related to this, especially when the availability of countries would ensure economic development Committee and Speaker of state resources is severely affected.5 of the less wealthy member countries within the the Bangladesh Parliament. Commonwealth. There is an inextricable nexus between the The debate revolves around the notion of whether Commonwealth prevailing economic orders, policies and different models of trade trade offers any qualitative advantages to the Commonwealth nations and the complex market systems that operate within Commonwealth in comparison to trade with non-Commonwealth countries. It poses nations, together with the protection of human rights, which are the question of whether the General Agreement on Tariffs and guaranteed under respective Constitutions. It is important to note Trade (GATT) opening up generalized free trade is a better and more that economic recession and meltdown has a severely negative viable option. ‘Brexit’ may now bring in a new twist to the discourse impact on human lives, causing unemployment and job loss, shrinking necessitating the adoption of a trade policy by the United Kingdom wherein Commonwealth free trade may gain currency. Generally any discussion on Commonwealth trade would aim to provide a comparative analysis of these issues. It would attempt to identify the impediments and barriers that exist in facilitating trade between the 4 countries within the Commonwealth. It would entail examining cost advantage, etc. The focus would be on increasing trade volumes by removal of barriers, ensuring free flow of goods to bring about a win-win situation for all. However, while the concept of Commonwealth free trade has been termed by certain critics as “the ultimate Euro sceptic fantasy”2, it is believed that “Common Trade, Common Wealth, Common Growth”3 presents a wealth of opportunities for Commonwealth nations. Let me introduce a different perspective. Commonwealth nations, comprising of 53 member states, represent 2.3 billion people, nearly one third of the world’s population. The objectives of the Commonwealth to promote democracy and development, individual liberty, equality and eradication of poverty resonates with the

“The Universal Declaration of Human Rights, an integral component of the International Bill of Rights , is considered as the universal standard setter or benchmark of essential basic rights and the minimum necessary to ensure the fundamental welfare of individuals. It is therefore essential to examine how the ‘political economy’ of Commonwealth nations affects human rights.”