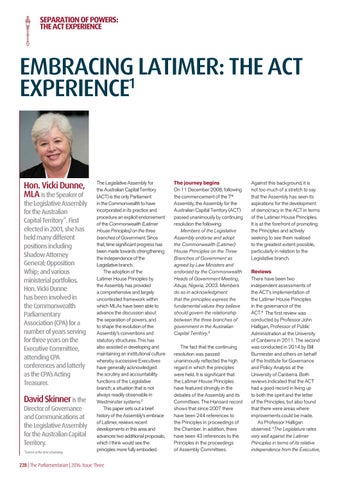 Separation of Powers: The ACT experience

Hon. Vicki Dunne, MLA is the Speaker of

the Legislative Assembly for the Australian Capital Territory*. First elected in 2001, she has held many different positions including Shadow Attorney General; Opposition Whip; and various ministerial portfolios. Hon. Vicki Dunne has been involved in the Commonwealth Parliamentary Association (CPA) for a number of years serving for three years on the Executive Committee, attending CPA conferences and latterly as the CPA’s Acting Treasurer.

David Skinner is the

Director of Governance and Communications at the Legislative Assembly for the Australian Capital Territory.

*Correct at the time of printing.

The Legislative Assembly for the Australian Capital Territory (ACT) is the only Parliament in the Commonwealth to have incorporated in its practice and procedure an explicit endorsement of the Commonwealth (Latimer House Principles) on the three branches of Government. Since that, time significant progress has been made towards strengthening the independence of the Legislative branch. The adoption of the Latimer House Principles by the Assembly has provided a comprehensive and largely uncontested framework within which MLAs have been able to advance the discussion about the separation of powers, and to shape the evolution of the Assembly’s conventions and statutory structures. This has also assisted in developing and maintaining an institutional culture whereby successive Executives have generally acknowledged the scrutiny and accountability functions of the Legislative branch; a situation that is not always readily observable in Westminster systems.2 This paper sets out a brief history of the Assembly’s embrace of Latimer, reviews recent developments in this area and advances two additional proposals, which I think would see the principles more fully embodied.

The journey begins On 11 December 2008, following the commencement of the 7th Assembly, the Assembly for the Australian Capital Territory (ACT) passed unanimously by continuing resolution the following: Members of the Legislative Assembly endorse and adopt the Commonwealth (Latimer) House Principles on the Three Branches of Government as agreed by Law Ministers and endorsed by the Commonwealth Heads of Government Meeting, Abuja, Nigeria, 2003. Members do so in acknowledgment that the principles express the fundamental values they believe should govern the relationship between the three branches of government in the Australian Capital Territory.3 The fact that the continuing resolution was passed unanimously reflected the high regard in which the principles were held. It is significant that the Latimer House Principles have featured strongly in the debates of the Assembly and its Committees. The Hansard record shows that since 2007 there have been 244 references to the Principles in proceedings of the Chamber. In addition, there have been 43 references to the Principles in the proceedings of Assembly Committees.

Against this background, it is not too much of a stretch to say that the Assembly has seen its aspirations for the development of democracy in the ACT in terms of the Latimer House Principles. It is at the forefront of promoting the Principles and actively seeking to see them realised to the greatest extent possible, particularly in relation to the Legislative branch. Reviews There have been two independent assessments of the ACT’s implementation of the Latimer House Principles in the governance of the ACT.4 The first review was conducted by Professor John Halligan, Professor of Public Administration at the University of Canberra in 2011. The second was conducted in 2014 by Bill Burmester and others on behalf of the Institute for Governance and Policy Analysis at the University of Canberra. Both reviews indicated that the ACT had a good record in living up to both the spirit and the letter of the Principles, but also found that there were areas where improvements could be made. As Professor Halligan observed: “The Legislature rates very well against the Latimer Principles in terms of its relative independence from the Executive,