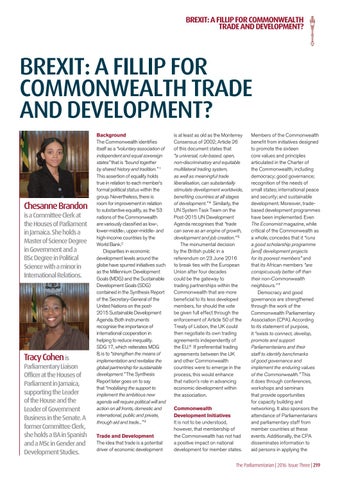 BREXIT: A FILLIP FOR COMMONWEALTH TRADE AND DEVELOPMENT?

BREXIT: A FILLIP FOR COMMONWEALTH TRADE AND DEVELOPMENT?

Chesanne Brandon is a Committee Clerk at the Houses of Parliament in Jamaica. She holds a Master of Science Degree in Government and a BSc Degree in Political Science with a minor in International Relations.

Tracy Cohen is Parliamentary Liaison Officer at the Houses of Parliament in Jamaica, supporting the Leader of the House and the Leader of Government Business in the Senate. A former Committee Clerk, she holds a BA in Spanish and a MSc in Gender and Development Studies.

Background The Commonwealth identifies itself as a “voluntary association of independent and equal sovereign states” that is “bound together by shared history and tradition.” 1 This assertion of equality holds true in relation to each member’s formal political status within the group. Nevertheless, there is room for improvement in relation to substantive equality, as the 53 nations of the Commonwealth are variously classified as low-, lower-middle-, upper-middle- and high-income countries by the World Bank.2 Disparities in economic development levels around the globe have spurred initiatives such as the Millennium Development Goals (MDG) and the Sustainable Development Goals (SDG) contained in the Synthesis Report of the Secretary-General of the United Nations on the post2015 Sustainable Development Agenda. Both instruments recognise the importance of international cooperation in helping to reduce inequality. SDG 17, which reiterates MDG 8, is to “strengthen the means of implementation and revitalise the global partnership for sustainable development.” The Synthesis Report later goes on to say that “mobilising the support to implement the ambitious new agenda will require political will and action on all fronts, domestic and international, public and private, through aid and trade...” 3 Trade and Development The idea that trade is a potential driver of economic development

is at least as old as the Monterrey Consensus of 2002; Article 26 of this document states that “a universal, rule-based, open, non-discriminatory and equitable multilateral trading system, as well as meaningful trade liberalisation, can substantially stimulate development worldwide, benefiting countries at all stages of development.” 4 Similarly, the UN System Task Team on the Post-2015 UN Development Agenda recognises that “trade can serve as an engine of growth, development and job creation.” 5 The monumental decision by the British public in a referendum on 23 June 2016 to break ties with the European Union after four decades could be the gateway to trading partnerships within the Commonwealth that are more beneficial to its less developed members, for should the vote be given full effect through the enforcement of Article 50 of the Treaty of Lisbon, the UK could then negotiate its own trading agreements independently of the EU.6 If preferential trading agreements between the UK and other Commonwealth countries were to emerge in the process, this would enhance that nation’s role in advancing economic development within the association. Commonwealth Development Initiatives It is not to be understood, however, that membership of the Commonwealth has not had a positive impact on national development for member states.

Members of the Commonwealth benefit from initiatives designed to promote the sixteen core values and principles articulated in the Charter of the Commonwealth, including democracy; good governance; recognition of the needs of small states; international peace and security; and sustainable development. Moreover, tradebased development programmes have been implemented. Even The Economist magazine, while critical of the Commonwealth as a whole, concedes that it “runs a good scholarship programme [and] development projects for its poorest members” and that its African members “are conspicuously better off than their non-Commonwealth neighbours.” 7 Democracy and good governance are strengthened through the work of the Commonwealth Parliamentary Association (CPA). According to its statement of purpose, it “exists to connect, develop, promote and support Parliamentarians and their staff to identify benchmarks of good governance and implement the enduring values of the Commonwealth.” This it does through conferences, workshops and seminars that provide opportunities for capacity building and networking. It also sponsors the attendance of Parliamentarians and parliamentary staff from member countries at these events. Additionally, the CPA disseminates information to aid persons in applying the