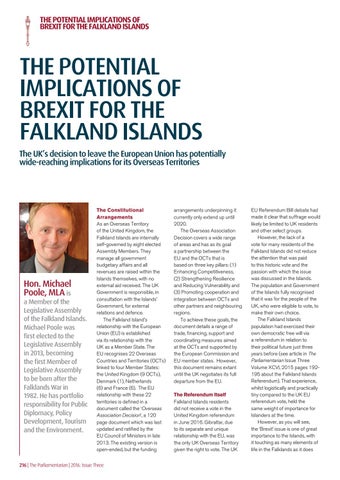 THE POTENTIAL IMPLICATIONS OF BREXIT FOR THE FALKLAND ISLANDS

The Constitutional Arrangements As an Overseas Territory of the United Kingdom, the Falkland Islands are internally self-governed by eight elected Assembly Members. They manage all government budgetary affairs and all revenues are raised within the Islands themselves, with no external aid received. The UK Government is responsible, in consultation with the Islands’ Government, for external relations and defence. The Falkland Island’s relationship with the European Union (EU) is established via its relationship with the UK as a Member State. The EU recognises 22 Overseas Countries and Territories (OCTs) linked to four Member States: the United Kingdom (9 OCTs), Denmark (1), Netherlands (6) and France (6). The EU relationship with these 22 territories is defined in a document called the ‘Overseas Association Decision’, a 120 page document which was last updated and ratified by the EU Council of Ministers in late 2013. The existing version is open-ended, but the funding

arrangements underpinning it currently only extend up until 2020. The Overseas Association Decision covers a wide range of areas and has as its goal a partnership between the EU and the OCTs that is based on three key pillars: (1) Enhancing Competitiveness, (2) Strengthening Resilience and Reducing Vulnerability and (3) Promoting cooperation and integration between OCTs and other partners and neighbouring regions. To achieve these goals, the document details a range of trade, financing, support and coordinating measures aimed at the OCTs and supported by the European Commission and EU member states. However, this document remains extant until the UK negotiates its full departure from the EU. The Referendum Itself Falkland Islands residents did not receive a vote in the United Kingdom referendum in June 2016. Gibraltar, due to its separate and unique relationship with the EU, was the only UK Overseas Territory given the right to vote. The UK

EU Referendum Bill debate had made it clear that suffrage would likely be limited to UK residents and other select groups. However, the lack of a vote for many residents of the Falkland Islands did not reduce the attention that was paid to this historic vote and the passion with which the issue was discussed in the Islands. The population and Government of the Islands fully recognised that it was for the people of the UK, who were eligible to vote, to make their own choice. The Falkland Islands population had exercised their own democratic free will via a referendum in relation to their political future just three years before (see article in The Parliamentarian Issue Three Volume XCVI, 2015 pages 192195 about the Falkland Islands Referendum). That experience, whilst logistically and practically tiny compared to the UK EU referendum vote, held the same weight of importance for Islanders at the time. However, as you will see, the ‘Brexit’ issue is one of great importance to the Islands, with it touching as many elements of life in the Falklands as it does