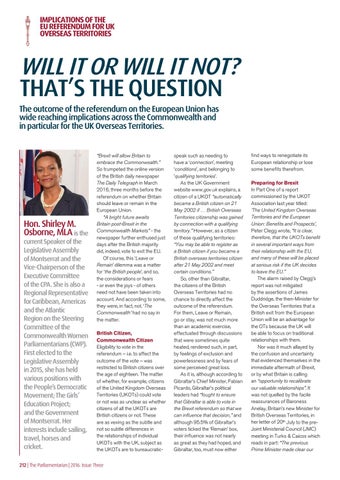 Implications of the EU referendum for UK Overseas territories

Will it or will it not? That’s the question

The outcome of the referendum on the European Union has wide reaching implications across the Commonwealth and in particular for the UK Overseas Territories.

current Speaker of the Legislative Assembly of Montserrat and the Vice-Chairperson of the Executive Committee of the CPA. She is also a Regional Representative for Caribbean, Americas and the Atlantic Region on the Steering Committee of the Commonwealth Women Parliamentarians (CWP). First elected to the Legislative Assembly in 2015, she has held various positions with the People’s Democratic Movement; The Girls’ Education Project; and the Government of Montserrat. Her interests include sailing, travel, horses and cricket.

“Brexit will allow Britain to embrace the Commonwealth.” So trumpeted the online version of the British daily newspaper The Daily Telegraph in March 2016, three months before the referendum on whether Britain should leave or remain in the European Union. “A bright future awaits Britain post-Brexit in the Commonwealth Markets” - the newspaper further enthused just days after the British majority did, indeed, vote to exit the EU. Of course, this ‘Leave or Remain’ dilemma was a matter for ‘the British people’, and so, the considerations or fears - or even the joys - of others need not have been taken into account. And according to some, they were, in fact, not. ‘The Commonwealth’ had no say in the matter. British Citizen, Commonwealth Citizen Eligibility to vote in the referendum – i.e. to affect the outcome of the vote – was restricted to British citizens over the age of eighteen. The matter of whether, for example, citizens of the United Kingdom Overseas Territories (UKOTs) could vote or not was as unclear as whether citizens of all the UKOTs are British citizens or not. These are as vexing as the subtle and not so subtle differences in the relationships of individual UKOTs with the UK, subject as the UKOTs are to bureaucratic-

speak such as needing to have a ‘connection’, meeting ‘conditions’, and belonging to ’qualifying territories’. As the UK Government website www.gov.uk explains, a citizen of a UKOT “automatically became a British citizen on 21 May 2002 if … British Overseas Territories citizenship was gained by connection with a qualifying territory.” However, as a citizen of these qualifying territories: “You may be able to register as a British citizen if you became a British overseas territories citizen after 21 May 2002 and meet certain conditions.” So, other than Gibraltar, the citizens of the British Overseas Territories had no chance to directly affect the outcome of the referendum. For them, Leave or Remain, go or stay, was not much more than an academic exercise, effectuated through discussions that were sometimes quite heated, rendered such, in part, by feelings of exclusion and powerlessness and by fears of some perceived great loss. As it is, although according to Gibraltar’s Chief Minister, Fabian Picardo, Gibraltar’s political leaders had “fought to ensure that Gibraltar is able to vote in the Brexit referendum so that we can influence that decision,” and although 95.5% of Gibraltar’s voters ticked the ‘Remain’ box, their influence was not nearly as great as they had hoped, and Gibraltar, too, must now either

find ways to renegotiate its European relationship or lose some benefits therefrom. Preparing for Brexit In Part One of a report commissioned by the UKOT Association last year titled: ’The United Kingdom Overseas Territories and the European Union: Benefits and Prospects’, Peter Clegg wrote, “It is clear, therefore, that the UKOTs benefit in several important ways from their relationship with the EU, and many of these will be placed at serious risk if the UK decides to leave the EU.” The alarm raised by Clegg’s report was not mitigated by the assertions of James Duddridge, the then-Minister for the Overseas Territories that a British exit from the European Union will be an advantage for the OTs because the UK will be able to focus on traditional relationships with them. Nor was it much allayed by the confusion and uncertainty that evidenced themselves in the immediate aftermath of Brexit, or by what Britain is calling an “opportunity to recalibrate our valuable relationships”. It was not quelled by the facile reassurances of Baroness Anelay, Britain’s new Minister for British Overseas Territories, in her letter of 20th July to the preJoint Ministerial Council (JMC) meeting in Turks & Caicos which reads in part: “The previous Prime Minister made clear our