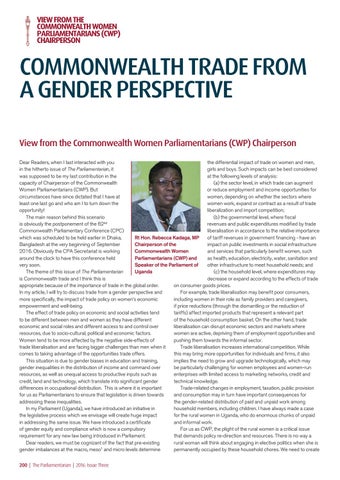 Commonwealth Trade from a Gender Perspective View from the Commonwealth Women Parliamentarians (CWP) Chairperson Dear Readers, when I last interacted with you the differential impact of trade on women and men, in the hitherto issue of The Parliamentarian, it girls and boys. Such impacts can be best considered was supposed to be my last contribution in the at the following levels of analysis: capacity of Chairperson of the Commonwealth (a) the sector level, in which trade can augment Women Parliamentarians (CWP). But or reduce employment and income opportunities for women, depending on whether the sectors where circumstances have since dictated that I have at least one last go and who am I to turn down the women work, expand or contract as a result of trade opportunity! liberalization and import competition; (b) the governmental level, where fiscal The main reason behind this scenario revenues and public expenditures modified by trade is obviously the postponement of the 62nd liberalisation in accordance to the relative importance Commonwealth Parliamentary Conference (CPC) of tariff revenues in government financing - have an which was scheduled to be held earlier in Dhaka, Rt Hon. Rebecca Kadaga, MP impact on public investments in social infrastructure Bangladesh at the very beginning of September Chairperson of the and services that particularly benefit women, such 2016. Obviously the CPA Secretariat is working Commonwealth Women as health, education, electricity, water, sanitation and around the clock to have this conference held Parliamentarians (CWP) and other infrastructure to meet household needs; and very soon. Speaker of the Parliament of (c) the household level, where expenditures may The theme of this issue of The Parliamentarian Uganda decrease or expand according to the effects of trade is Commonwealth trade and I think this is on consumer goods prices. appropriate because of the importance of trade in the global order. For example, trade liberalisation may benefit poor consumers, In my article, I will try to discuss trade from a gender perspective and including women in their role as family providers and caregivers, more specifically, the impact of trade policy on womenâ&amp;#x20AC;&amp;#x2122;s economic if price reductions (through the dismantling or the reduction of empowerment and well-being. tariffs) affect imported products that represent a relevant part The effect of trade policy on economic and social activities tend of the household consumption basket. On the other hand, trade to be different between men and women as they have different liberalisation can disrupt economic sectors and markets where economic and social roles and different access to and control over women are active, depriving them of employment opportunities and resources, due to socio-cultural, political and economic factors. pushing them towards the informal sector. Women tend to be more affected by the negative side-effects of Trade liberalisation increases international competition. While trade liberalisation and are facing bigger challenges than men when it this may bring more opportunities for individuals and firms, it also comes to taking advantage of the opportunities trade offers. implies the need to grow and upgrade technologically, which may This situation is due to gender biases in education and training, be particularly challenging for women employees and women-run gender inequalities in the distribution of income and command over enterprises with limited access to marketing networks, credit and resources, as well as unequal access to productive inputs such as technical knowledge. credit, land and technology, which translate into significant gender Trade-related changes in employment, taxation, public provision differences in occupational distribution. This is where it is important and consumption may in turn have important consequences for for us as Parliamentarians to ensure that legislation is driven towards the gender-related distribution of paid and unpaid work among addressing these inequalities. household members, including children. I have always made a case In my Parliament (Uganda), we have introduced an initiative in for the rural women in Uganda, who do enormous chunks of unpaid the legislative process which we envisage will create huge impact and informal work. in addressing the same issue. We have introduced a certificate For us as CWP, the plight of the rural women is a critical issue of gender equity and compliance which is now a compulsory that demands policy re-direction and resources. There is no way a requirement for any new law being introduced in Parliament. rural woman will think about engaging in elective politics when she is Dear readers, we must be cognizant of the fact that pre-existing permanently occupied by these household chores. We need to create gender imbalances at the macro, meso1 and micro levels determine 200 | The Parliamentarian | 2016: Issue Three