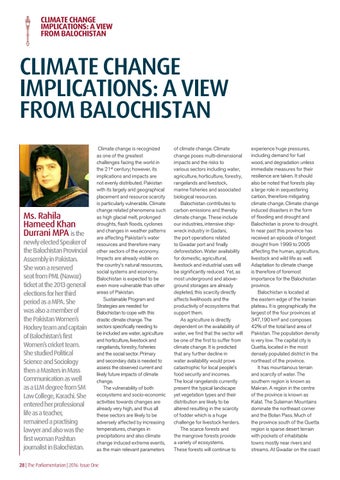 newly elected Speaker of the Balochistan Provincial Assembly in Pakistan. She won a reserved seat from PML (Nawaz) ticket at the 2013 general elections for her third period as a MPA. She was also a member of the Pakistan Women’s Hockey team and captain of Balochistan’s first Women’s cricket team. She studied Political Science and Sociology then a Masters in Mass Communication as well as a LLM degree from SM Law College, Karachi. She entered her professional life as a teacher, remained a practising lawyer and also was the first woman Pashtun journalist in Balochistan.

Climate change is recognized as one of the greatest challenges facing the world in the 21st century; however, its implications and impacts are not evenly distributed. Pakistan with its largely arid geographical placement and resource scarcity is particularly vulnerable. Climate change related phenomena such as high glacial melt, prolonged droughts, flash floods, cyclones and changes in weather patterns are affecting Pakistan’s water resources and therefore many other sectors of the economy. Impacts are already visible on the country’s natural resources, social systems and economy. Balochistan is expected to be even more vulnerable than other areas of Pakistan. Sustainable Program and Strategies are needed for Balochistan to cope with this drastic climate change. The sectors specifically needing to be included are water, agriculture and horticulture, livestock and rangelands, forestry, fisheries and the social sector. Primary and secondary data is needed to assess the observed current and likely future impacts of climate change. The vulnerability of both ecosystems and socio-economic activities towards changes are already very high, and thus all these sectors are likely to be adversely affected by increasing temperatures, changes in precipitations and also climate change induced extreme events, as the main relevant parameters

of climate change. Climate change poses multi-dimensional impacts and the risks to various sectors including water, agriculture, horticulture, forestry, rangelands and livestock, marine fisheries and associated biological resources. Balochistan contributes to carbon emissions and thereby climate change. These include our industries, intensive shipwreck industry in Gadani, the port operations related to Gwadar port and finally deforestation. Water availability for domestic, agricultural, livestock and industrial uses will be significantly reduced. Yet, as most underground and aboveground storages are already depleted, this scarcity directly affects livelihoods and the productivity of ecosystems that support them. As agriculture is directly dependent on the availability of water, we find that the sector will be one of the first to suffer from climate change. It is predicted that any further decline in water availability would prove catastrophic for local people’s food security and incomes. The local rangelands currently present the typical landscape yet vegetation types and their distribution are likely to be altered resulting in the scarcity of fodder which is a huge challenge for livestock herders. The scarce forests and the mangrove forests provide a variety of ecosystems. These forests will continue to

experience huge pressures, including demand for fuel wood, and degradation unless immediate measures for their resilience are taken. It should also be noted that forests play a large role in sequestering carbon, therefore mitigating climate change. Climate change induced disasters in the form of flooding and drought and Balochistan is prone to drought. In near past this province has received an episode of longest drought from 1999 to 2005 affecting the human, agriculture, livestock and wild life as well. Adaptation to climate change is therefore of foremost importance for the Balochistan province. Balochistan is located at the eastern edge of the Iranian plateau. It is geographically the largest of the four provinces at 347,190 km² and composes 42% of the total land area of Pakistan. The population density is very low. The capital city is Quetta, located in the most densely populated district in the northeast of the province. It has mountainous terrain and scarcity of water. The southern region is known as Makran. A region in the centre of the province is known as Kalat. The Sulaiman Mountains dominate the northeast corner and the Bolan Pass. Much of the province south of the Quetta region is sparse desert terrain with pockets of inhabitable towns mostly near rivers and streams. At Gwadar on the coast