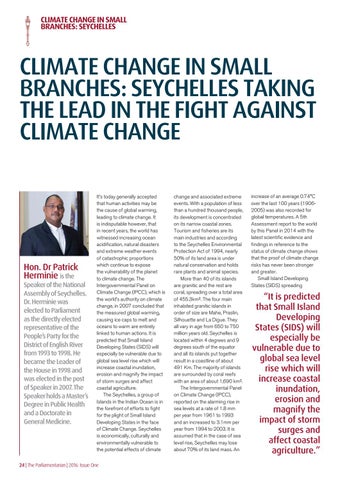 Hon. Dr Patrick Herminie is the

Speaker of the National Assembly of Seychelles. Dr. Herminie was elected to Parliament as the directly elected representative of the People’s Party for the District of English River from 1993 to 1998. He became the Leader of the House in 1998 and was elected in the post of Speaker in 2007. The Speaker holds a Master’s Degree in Public Health and a Doctorate in General Medicine.

It’s today generally accepted that human activities may be the cause of global warming, leading to climate change. It is indisputable however, that in recent years, the world has witnessed increasing ocean acidification, natural disasters and extreme weather events of catastrophic proportions which continue to expose the vulnerability of the planet to climate change. The Intergovernmental Panel on Climate Change (IPCC), which is the world’s authority on climate change, in 2007 concluded that the measured global warming, causing ice caps to melt and oceans to warm are entirely linked to human actions. It is predicted that Small Island Developing States (SIDS) will especially be vulnerable due to global sea level rise which will increase coastal inundation, erosion and magnify the impact of storm surges and affect coastal agriculture. The Seychelles, a group of Islands in the Indian Ocean is in the forefront of efforts to fight for the plight of Small Island Developing States in the face of Climate Change. Seychelles is economically, culturally and environmentally vulnerable to the potential effects of climate

change and associated extreme events. With a population of less than a hundred thousand people, its development is concentrated on its narrow coastal zones. Tourism and fisheries are its main industries and according to the Seychelles Environmental Protection Act of 1994, nearly 50% of its land area is under natural conservation and holds rare plants and animal species. More than 40 of its islands are granitic and the rest are coral, spreading over a total area of 455.3km². The four main inhabited granitic islands in order of size are Mahe, Praslin, Silhouette and La Digue. They all vary in age from 650 to 750 million years old. Seychelles is located within 4 degrees and 9 degrees south of the equator and all its islands put together result in a coastline of about 491 Km. The majority of islands are surrounded by coral reefs with an area of about 1,690 km². The Intergovernmental Panel on Climate Change (IPCC), reported on the alarming rise in sea levels at a rate of 1.8 mm per year from 1961 to 1993 and an increased to 3.1mm per year from 1994 to 2003. It is assumed that in the case of sea level rise, Seychelles may lose about 70% of its land mass. An

increase of an average 0.74°C over the last 100 years (19062005) was also recorded for global temperatures. A 5th Assessment report to the world by this Panel in 2014 with the latest scientific evidence and findings in reference to the status of climate change shows that the proof of climate change risks has never been stronger and greater. Small Island Developing States (SIDS) spreading

“It is predicted that Small Island Developing States (SIDS) will especially be vulnerable due to global sea level rise which will increase coastal inundation, erosion and magnify the impact of storm surges and affect coastal agriculture.”