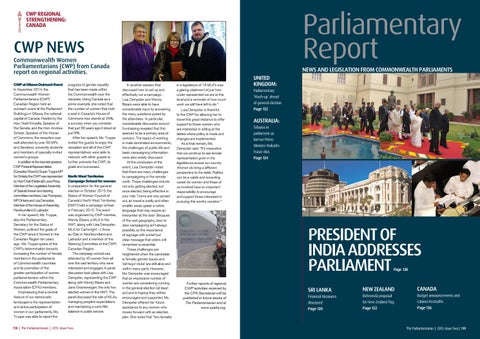 Commonwealth Women Parliamentarians (CWP) from Canada report on regional activities. CWP at Ottawa Outreach Event In November 2014, the Commonwealth Women Parliamentarians (CWP) Canadian Region held an outreach event at the Parliament Buildings in Ottawa, the national capital of Canada. Hosted by the Hon. Noël Kinsella, Speaker of the Senate, and the Hon. Andrew Scheer, Speaker of the House of Commons, the reception was well attended by over 30 MPs and Senators, university students and members of specially invited women’s groups. In addition to the keynote speaker, CWP Federal Representative (Canadian Branch), Susan Truppe MP for Ontario, the CWP was represented by Vice-Chair (National) Laura Ross, Member of the Legislative Assembly of Saskatchewan and steering committee members, Lisa Thompson, MP Ontario and Lisa Dempster, Member of the House of Assembly, Newfoundland & Labrador. In her speech, Ms. Truppe, also the Parliamentary Secretary for the Status of Women, outlined the goals of the CWP since it formed in the Canadian Region ten years ago. Ms. Truppe spoke of the CWP’s determination towards increasing the number of female members in the parliaments of Commonwealth countries and its promotion of the greater participation of women parliamentarians within the Commonwealth Parliamentary Association (CPA) members. Emphasizing that a central feature of our democratic landscape is the representation and active participation of women in our parliaments, Ms. Truppe was able to report the

progress of gender equality that has been made within the Commonwealth over the decades. Using Canada as a prime example, she noted that the number of women that hold a seat in Canada’s House of Commons now stands at 25%, a success when you consider that just 30 years ago it stood at just 9%. After her speech, Ms. Truppe invited the guests to enjoy the reception and all of the CWP representatives were able to network with other guests to further promote the CWP, its goals and successes. North West Territories Campaign School for women In preparation for the general election in October 2015, the Status of Women Council of Canada’s North West Territories (NWT) held a campaign school in February 2015. The event was organised by CWP member, Wendy Bisaro, a MLA in the NWT, along with Lisa Dempster, MLA for Cartwright - L'Anse au Clair in Newfoundland and Labrador and a member of the Steering Committee of the CWP, Canadian Region. The campaign school was attended by 45 women from all over the vast territory who were interested and engaged. A panel discussion took place with Lisa Dempster, representing the CWP along with Wendy Bisaro and Jane Groenewegen, the only two elected women in the NWT. The panel discussed the role of MLAs, managing people's expectations and maintaining a work/life balance in public service.

NEWS AND LEGISLATION FROM COMMONWEALTH PARLIAMENTS In another session that discussed how to set up and effectively run a campaign, Lisa Dempster and Wendy Bisaro were able to have considerable input by answering the many questions posed by the attendees. In particular, considerable discussion around fundraising revealed that this seemed to be a primary area of concern. The topics of working in male dominated environments, the challenges of public life and basic campaigning information were also widely discussed At the conclusion of the event, Lisa Dempster noted that there are many challenges to campaigning in the remote north. Those challenges include not only getting elected, but once elected, being effective in your role. Towns are very spread out, air travel is costly and often smaller areas speak a native language that may require an interpreter at the door. Because of the vast geography, door to door campaigning isn't always possible, so the importance of signage with a brief but clear message that voters will remember is essential. These challenges are heightened when the candidate is female; gender issues and ‘old boys’ clubs’ are still alive and well in many parts. However, Ms. Dempster was encouraged that an impressive number of women are considering running in the general election (at least six) and is hoping they will be encouraged and supported. Ms. Dempster offered her future assistance to any women who moves forward with an election plan. She noted that “two females

in a legislature of 19 MLA's was a glaring statement of just how under represented we are at this level and a reminder of how much work we still have left to do.” Lisa Dempster is thankful to the CWP for allowing her to travel this great distance to offer support to those women who are interested in sitting at the tables where policy is made and changes are implemented. As a final remark, Ms. Dempster said: “It's imperative that we continue to see female representation grow in the legislatures across our country. Women do bring a different perspective to the table. Politics can be a viable and rewarding career for women and those of us involved have an important responsibility to encourage and support those interested in pursuing this worthy vocation.”

Further reports of regional CWP activities received by the CPA Secretariat will be published in future issues of The Parliamentarian and at www.cpahq.org.