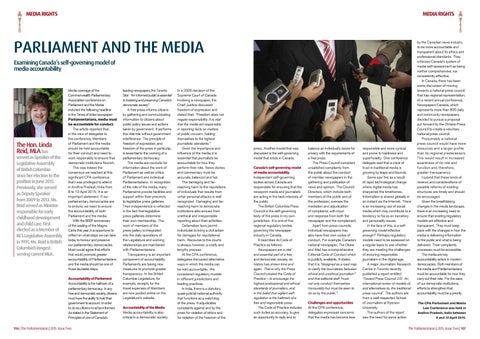 The Hon. Linda Reid, MLA has

served as Speaker of the Legislative Assembly of British Columbia since her election to the position in June 2013. Previously, she served as Deputy Speaker from 2009 to 2013. Ms. Reid served as Minister responsible for early childhood development and child care. First elected as a Member of BC’s Legislative Assembly in 1991, Ms. Reid is British Columbia’s longest serving current MLA.

Media coverage of the Commonwealth Parliamentary Association conference on Parliament and the Media included the following headline in the Times of India newspaper: Parliamentarians, media must be accountable for conduct. The article reported that, in the view of delegates to the conference, Members of Parliament and the media should be held accountable for their conduct and need to work responsibly to ensure that democratic institutions flourish. This was indeed the consensus we reached at this significant CPA conference that I was privileged to attend in Andhra Pradesh, India from 8 to 10 April 2015. It is an important statement. If our parliamentary democracies are to endure, we need to ensure the accountability of both Parliament and the media. With the 800th anniversary of the sealing of the Magna Carta this year, it is opportune to reflect on what steps we can take today to honour and preserve our parliamentary democracies. Most would agree that efforts that would promote greater accountability of Parliamentarians and the media should be one of those laudable steps. Accountability of Parliament Accountability is the hallmark of a parliamentary democracy. In any free and democratic society, citizens must have the ability to hold their government to account. In order to do so, citizens must be informed. As stated in the Statement of Principles of one of Canada’s

leading newspapers, the Toronto Star: “An informed public is essential to fostering and preserving Canada’s democratic society”. A free press informs citizens by gathering and communicating information to citizens about public policy issues and actions taken by government. It performs this vital role without government interference. The principle of freedom of expression, and freedom of the press in particular, is essential to the working of a parliamentary democracy. The media are conduits for information about the work of Parliament as well as critics of Parliament and individual Parliamentarians. In recognition of the role of the media, many Parliaments provide facilities and support within their precincts to legislative press galleries. Their independence is reflected in the fact that legislative press galleries determine their own membership. The work of members of the press gallery is integrated into the daily operations of the Legislature and working relationships are maintained with Parliamentarians. Transparency is an important component of accountability. Parliaments are taking new measures to promote greater transparency. In the British Columbia Legislature, for example, receipts for the travel expenses of Members are now posted online on the Legislature’s website. Accountability of the Media Media accountability is also critical in a democratic society.

In a 2009 decision of the Supreme Court of Canada involving a newspaper, the Chief Justice discussed freedom of expression and stated that: “Freedom does not negate responsibility. It is vital that the media act responsibly in reporting facts on matters of public concern, holding themselves to the highest journalistic standards.” Given the importance and influence of the media, it is essential that journalists be accountable for how they perform their role. News stories and commentary must be accurate, balanced and fair. The damaging and farreaching harm to the reputations of individuals that results from unfair personal attacks is well recognized. Damaging and farreaching harm to democratic institutions also ensues from unethical and irresponsible reporting about their activities. Defamation laws permit individuals to bring a civil action for damages for reputational harm. Recourse to the courts is always, however, a costly and lengthy process. At the CPA conference, delegates discussed alternative ways in which the media can be held accountable. We considered regulatory models in different jurisdictions and leading practices. In India, there is a statutory, quasi-judicial national authority that functions as a watchdog of the press. It adjudicates complaints against and by the press for violation of ethics and for violation of the freedom of the

press. Another model that was discussed is the self-governing model that exists in Canada. Canada’s self-governing model xxxxxx of media accountability Independent self-governing bodies across Canada are responsible for ensuring that the newsprint media and journalists are acting in the best interests of the public. The British Columbia Press Council is the self-governing body of the press in my own jurisdiction. It is one of five regional regulatory bodies governing the newspaper industry in Canada. It describes its Code of Practice as follows: Newspapers are a vital and essential part of a free and democratic society, as history has shown time and again. That is why the Press Council created the Code of Practice – to encourage the highest professional and ethical standards of journalism, and in the belief that vigilant selfregulation is the hallmark of a free and responsible press. The Code of Practice includes such duties as accuracy, to give an opportunity to reply and to

balance an individual’s desire for privacy with the requirements of a free press. The Press Council considers unsatisfied complaints from the public about the conduct of member newspapers in the gathering and publication of news and opinion. The Council Directors, which include both members of the public and of the profession, oversee the mediation and adjudication of complaints, with input and response from both the newspaper and the complainant. Apart from press councils, individual newspapers may also have their own codes of conduct. For example, Canada’s national newspaper, The Globe and Mail, has a comprehensive Editorial Code of Conduct which is publicly available. It states that it is “designed as a road map to clarify the boundaries between ethical and unethical journalism” and that editorial staff “must not only conduct themselves honourably but must be seen to do so by the public.” Challenges and opportunities At the CPA conference, delegates expressed concerns that the media has become less

responsible and more cynical and prone to hastiness and superficiality. One conference delegate said that a crisis of trust in traditional media is growing by leaps and bounds. Some saw this as a result of rapid technological change where digital media has sharpened the timeframes. Information is shared globally in an instant via the Internet. There is an increasing use of social media which may contribute to a tendency to focus on transitory and personality issues. In the face of this, is a selfgoverning model effective enough? Perhaps regulatory models need to be assessed on a regular basis to see whether they are meeting the challenges of ensuring responsible journalism in the digital age. A major Journalism Research Centre in Toronto recently published a report entitled ‘Toward Press Council 2.0: An international review of models of, and alternatives to, the traditional press council’. The authors are from a well-respected School of Journalism at Ryerson University. The authors of the report saw the need for some action

by the Canadian news industry to be more accountable and transparent about its ethics and professional standards. They criticized Canada’s system of media self-assessment as being neither comprehensive, nor consistently effective. In Canada, there has been some discussion of moving towards a national press council that has regional representation. At a recent annual conference, Newspapers Canada, which represents more than 800 daily and community newspapers, decided to pursue a proposal put forward by the Ontario Press Council to create a voluntary national press council. Presumably a national press council would have more resources and a larger profile than its regional predecessors. This would result in increased awareness of its role and function and, therefore, greater transparency. I submit that these kinds of reviews and considerations of possible reforms of existing structures are timely and should be encouraged. Given the breathtaking changes in the media landscape, there is an increasing need to ensure that existing regulatory models are effective and transparent. They must keep pace with the changes in how the media is delivering information to the public and what is being delivered. Their complaints processes must be accessible. The media are key accountability actors in modern democracies. Both members of the media and Parliamentarians must be accountable for how they carry out their role. For the sake of our democratic institutions, efforts to strengthen that accountability must be a priority. The CPA Parliament and Media Law Conference was held in Andhra Pradesh, India between 8 and 10 April 2015.