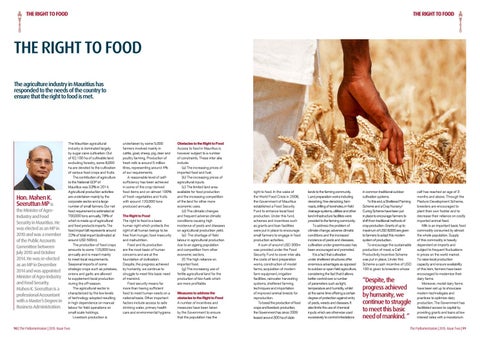 THE RIGHT TO FOOD

THE RIGHT TO FOOD

THE RIGHT TO FOOD The agriculture industry in Mauritius has responded to the needs of the country to ensure that the right to food is met.

the Minister of AgroIndustry and Food Security in Mauritius. He was elected as an MP in 2010 and was a member of the Public Accounts Committee between July 2010 and October 2014. He was re-elected as an MP in December 2014 and was appointed Minister of Agro-Industry and Food Security. Mahen K. Seeruttun is a professional Accountant with a Master’s Degree in Business Administration.

The Mauritian agricultural industry is dominated largely by sugar cane cultivation. Out of 62,100 ha of cultivable land excluding forestry, some 8,000 ha are devoted to the cultivation of various food crops and fruits. The contribution of agriculture to the National GDP of Mauritius was 3.3% in 2014. Agricultural production activities are undertaken mainly by the corporate sector and a large number of small farmers. Our net food requirement is estimated at 700,000 tons annually, 78% of which is made up of agricultural and food products imports. The food import bill represents around 22% of total import (estimated at around USD 500m). The production of food crops amounts to some 120,000 tons annually and is meant mainly to meet local requirements. Seasonal imports of some strategic crops such as potatoes, onions and garlic are allowed to supplement local production during the off-season. The agricultural sector is characterized by the low levels of technology adopted resulting in high dependence on manual labour for field operations on small scale holdings. Livestock production is

undertaken by some 5,000 farmers involved mainly in cattle, goat, sheep, pig, deer and poultry farming. Production of fresh milk is around 5 million litres, representing around 4% of our requirements. A reasonable level of selfsufficiency has been achieved in some of the crop-derived food items and on almost 100% of fresh vegetables and fruits with around 120,000 tons produced annually. The Right to Food The right to food is a basic human right which protects the right of all human beings to be free from hunger, food insecurity and malnutrition. Food and its production are the most basic of human concerns and are at the foundation of civilization. Despite, the progress achieved by humanity, we continue to struggle to meet this basic need of mankind. Food security means far more than having sufficient food to meet human needs on a national basis. Other important factors include access to safe drinking water, primary health care and environmental hygiene.

Obstacles to the Right to Food Access to food in Mauritius is however subject to a number of constraints. These inter alia include: (a) The increasing prices of imported food and fuel. (b) The increasing prices of agricultural inputs. (c) The limited land area available for food production and the increasing competition of the land for other more economic uses. (d) The climatic changes and frequent adverse climatic conditions causing high incidence of pests and diseases on agricultural production yield. (e) The shortage of field labour in agricultural production due to an ageing population and competition from other economic sectors. (f) The high reliance on imported food. (g) The increasing use of fertile agricultural land for the production of bio-fuels which are more profitable. Measures to address the obstacles to the Right to Food A number of incentives and measures have been taken by the Government to ensure that the population has the

right to food. In the wake of the World Food Crisis in 2008, the Government of Mauritius established a Food Security Fund to enhance local food production. Under this fund, schemes and incentives such as grants and loan facilities were put in place to encourage small farmers to engage in food production activities. A sum of around USD 300m was provided under the Food Security Fund to cover inter alia the costs of land preparation works, construction of model farms, acquisition of modern farm equipment, irrigation facilities, rainwater harvesting systems, sheltered farming techniques and importation of improved animal breeds for reproduction. To boost the production of food crops and livestock production, the Government has since 2009 leased around 300 ha of state

lands to the farming community. Land preparation works including derocking, fine-derocking, farm roads, drilling of boreholes, in-field drainage systems, utilities and other land infrastructure facilities were provided to the farming community. To address the problem of climate change, adverse climatic conditions and the increased incidence of pests and diseases, cultivation under greenhouses has been encouraged and promoted. It is a fact that cultivation under sheltered structures offer enormous advantages as opposed to outdoor or open field agriculture, considering the fact that it allows better control over a number of parameters such as light, temperature and humidity, whilst at the same time offering a certain degree of protection against entry of pests, weeds and diseases. It also limits the use of chemical inputs which are otherwise used excessively to control infestations

in common traditional outdoor cultivation systems. To this end, a Sheltered Farming Scheme and a Crop Nursery/ Curing Scheme have been put in place to encourage farmers to shift from traditional methods of crop production. Grants of up to maximum of USD 8,000 are given to farmers to adopt this modern system of production. To encourage the sustainable production of meat, a Calf Productivity Incentive Scheme was put in place. Under this Scheme a cash incentive of USD 100 is given to breeders whose

“Despite, the progress achieved by humanity, we continue to struggle to meet this basic need of mankind. ”

calf has reached an age of 3 months and above. Through the Pasture Development Scheme, breeders are encouraged to plant their own fodder and to decrease their reliance on costly imported animal feed. Milk is an important basic food commodity consumed by almost the whole population. Supply of this commodity is heavily dependent on imports and subject to frequent fluctuations in prices on the world market. To raise local production capacity and ensure availability of this item, farmers have been encouraged to modernize their dairy farms. Moreover, model dairy farms have been set up to showcase modern technologies and practices to optimize dairy production. The Government has facilitated access to capital by providing grants and loans at low interest rates with a moratorium

This issue of The Parliamentarian looks at rights in the modern age. The publication also features articles on the international legacy of Magna Carta, children's rights in Jamaica and the right to representative democracy in Norfolk Island.