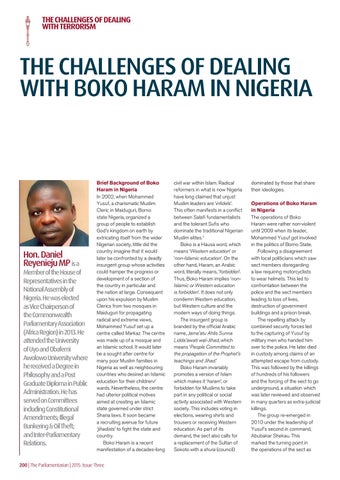 THE CHALLENGES OF DEALING WITH TERRORISM

THE CHALLENGES OF DEALING WITH BOKO HARAM IN NIGERIA

Hon. Daniel Reyenieju MP is a

Memberof the House of Representatives in the NationalAssemblyof Nigeria. He was elected asVice Chairperson of the Commonwealth ParliamentaryAssociation (Africa Region) in 2013. He attended the University of Uyo and Obafemi Awolowo Universitywhere he received a Degree in Philosophyand a Post Graduate Diploma in Public Administration. He has served on Committees including Constitutional Amendments; Illegal Bunkering & OilTheft; and Inter-Parliamentary Relations.

Brief Background of Boko Haram in Nigeria In 2002, when Mohammed Yusuf, a charismatic Muslim Cleric in Maiduguri, Borno state Nigeria, organized a group of people to establish God’s kingdom on earth by extricating itself from the wider Nigerian society, little did the country imagine that it would later be confronted by a deadly insurgent group whose activities could hamper the progress or development of a section of the country in particular and the nation at large. Consequent upon his expulsion by Muslim Clerics from two mosques in Maiduguri for propagating radical and extreme views, Mohammed Yusuf set up a centre called Markaz. The centre was made up of a mosque and an Islamic school. It would later be a sought after centre for many poor Muslim families in Nigeria as well as neighbouring countries who desired an Islamic education for their children/ wards. Nevertheless, the centre had ulterior political motives aimed at creating an Islamic state governed under strict Sharia laws. It soon became a recruiting avenue for future ‘jihadists’ to fight the state and country. Boko Haram is a recent manifestation of a decades-long

civil war within Islam. Radical reformers in what is now Nigeria have long claimed that unjust Muslim leaders are ‘infidels’. This often manifests in a conflict between Salafi fundamentalists and the tolerant Sufis who dominate the traditional Nigerian Muslim elites.1 Boko is a Hausa word, which means ‘Western education’ or ‘non-Islamic education’. On the other hand, Haram, an Arabic word, literally means, ‘forbidden’. Thus, Boko Haram implies ‘nonIslamic or Western education is forbidden’. It does not only condemn Western education, but Western culture and the modern ways of doing things. The insurgent group is branded by the official Arabic name, Jama’atu Ahlis Sunna Lidda’awati wal-Jihad, which means ‘People Committed to the propagation of the Prophet’s teachings and Jihad.’ Boko Haram invariably promotes a version of Islam which makes it ‘haram’, or forbidden for Muslims to take part in any political or social activity associated with Western society. This includes voting in elections, wearing shirts and trousers or receiving Western education. As part of its demand, the sect also calls for a replacement of the Sultan of Sokoto with a shura (council)

dominated by those that share their ideologies. Operations of Boko Haram in Nigeria The operations of Boko Haram were rather non-violent until 2009 when its leader, Mohammed Yusuf got involved in the politics of Borno State. Following a disagreement with local politicians which saw sect members disregarding a law requiring motorcyclists to wear helmets. This led to confrontation between the police and the sect members leading to loss of lives, destruction of government buildings and a prison break. The repelling attack by combined security forces led to the capturing of Yusuf by military men who handed him over to the police. He later died in custody among claims of an attempted escape from custody. This was followed by the killings of hundreds of his followers and the forcing of the sect to go underground, a situation which was later reviewed and observed in many quarters as extra-judicial killings. The group re-emerged in 2010 under the leadership of Yusuf’s second in command, Abubakar Shekau. This marked the turning point in the operations of the sect as