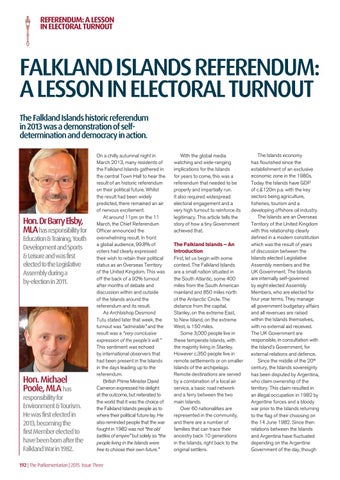 REFERENDUM: A LESSON IN ELECTORAL TURNOUT

FALKLAND ISLANDS REFERENDUM: A LESSON IN ELECTORAL TURNOUT The Falkland Islands historic referendum in 2013 was a demonstration of selfdetermination and democracy in action.

Education & Training, Youth Development and Sports & Leisure and was first elected to the Legislative Assembly during a by-election in 2011.

responsibility for Environment & Tourism. He was first elected in 2013, becoming the first Member elected to have been born after the Falkland War in 1982.

On a chilly autumnal night in March 2013, many residents of the Falkland Islands gathered in the central Town Hall to hear the result of an historic referendum on their political future. Whilst the result had been widely predicted, there remained an air of nervous excitement. At around 11pm on the 11 March, the Chief Referendum Officer announced the overwhelming result. In front a global audience, 99.8% of voters had clearly expressed their wish to retain their political status as an Overseas Territory of the United Kingdom. This was off the back of a 92% turnout after months of debate and discussion within and outside of the Islands around the referendum and its result. As Archbishop Desmond Tutu stated later that week, the turnout was “admirable” and the result was a “very conclusive expression of the people’s will.” This sentiment was echoed by international observers that had been present in the Islands in the days leading up to the referendum. British Prime Minister David Cameron expressed his delight at the outcome, but reiterated to the world that it was the choice of the Falkland Islands people as to where their political future lay. He also reminded people that the war fought in 1982 was not “the old battles of empire” but solely so “the people living in the Islands were free to choose their own future.”

With the global media watching and wide-ranging implications for the Islands for years to come, this was a referendum that needed to be properly and impartially run. It also required widespread electoral engagement and a very high turnout to reinforce its legitimacy. This article tells the story of how a tiny Government achieved that. The Falkland Islands – An Introduction First, let us begin with some context. The Falkland Islands are a small nation situated in the South Atlantic, some 400 miles from the South American mainland and 850 miles north of the Antarctic Circle. The distance from the capital, Stanley, on the extreme East, to New Island, on the extreme West, is 150 miles. Some 3,000 people live in these temperate Islands, with the majority living in Stanley. However c.350 people live in remote settlements or on smaller Islands of the archipelago. Remote destinations are served by a combination of a local air service, a basic road network and a ferry between the two main Islands. Over 60 nationalities are represented in the community, and there are a number of families that can trace their ancestry back 10 generations in the Islands, right back to the original settlers.

The Islands economy has flourished since the establishment of an exclusive economic zone in the 1980s. Today the Islands have GDP of c.£120m p.a. with the key sectors being agriculture, fisheries, tourism and a developing offshore oil industry. The Islands are an Overseas Territory of the United Kingdom with this relationship clearly defined in a modern constitution which was the result of years of discussion between the Islands elected Legislative Assembly members and the UK Government. The Islands are internally self-governed by eight elected Assembly Members, who are elected for four year terms. They manage all government budgetary affairs and all revenues are raised within the Islands themselves, with no external aid received. The UK Government are responsible, in consultation with the Island’s Government, for external relations and defence. Since the middle of the 20th century, the Islands sovereignty has been disputed by Argentina, who claim ownership of the territory. This claim resulted in an illegal occupation in 1982 by Argentine forces and a bloody war prior to the Islands returning to the flag of their choosing on the 14 June 1982. Since then relations between the Islands and Argentina have fluctuated depending on the Argentine Government of the day, though