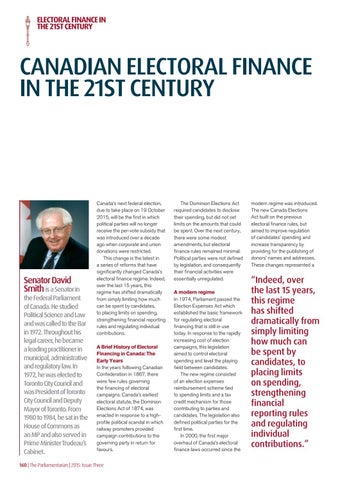 ELECTORAL FINANCE IN THE 21ST CENTURY

Senator David Smith is a Senator in

the Federal Parliament of Canada. He studied Political Science and Law and was called to the Bar in 1972. Throughout his legal career, he became a leading practitioner in municipal, administrative and regulatory law. In 1972, he was elected to Toronto City Council and was President of Toronto City Council and Deputy Mayor of Toronto. From 1980 to 1984, he sat in the House of Commons as an MP and also served in Prime Minister Trudeau’s Cabinet.

Canada’s next federal election, due to take place on 19 October 2015, will be the first in which political parties will no longer receive the per-vote subsidy that was introduced over a decade ago when corporate and union donations were restricted. This change is the latest in a series of reforms that have significantly changed Canada’s electoral finance regime. Indeed, over the last 15 years, this regime has shifted dramatically from simply limiting how much can be spent by candidates, to placing limits on spending, strengthening financial reporting rules and regulating individual contributions. A Brief History of Electoral Financing in Canada: The Early Years In the years following Canadian Confederation in 1867, there were few rules governing the financing of electoral campaigns. Canada’s earliest electoral statute, the Dominion Elections Act of 1874, was enacted in response to a highprofile political scandal in which railway promoters provided campaign contributions to the governing party in return for favours.

The Dominion Elections Act required candidates to disclose their spending, but did not set limits on the amounts that could be spent. Over the next century, there were some modest amendments, but electoral finance rules remained minimal. Political parties were not defined by legislation, and consequently their financial activities were essentially unregulated. A modern regime In 1974, Parliament passed the Election Expenses Act which established the basic framework for regulating electoral financing that is still in use today. In response to the rapidly increasing cost of election campaigns, this legislation aimed to control electoral spending and level the playing field between candidates. The new regime consisted of an election expenses reimbursement scheme tied to spending limits and a tax credit mechanism for those contributing to parties and candidates. The legislation also defined political parties for the first time. In 2000, the first major overhaul of Canada’s electoral finance laws occurred since the

modern regime was introduced. The new Canada Elections Act built on the previous electoral finance rules, but aimed to improve regulation of candidates’ spending and increase transparency by providing for the publishing of donors’ names and addresses. These changes represented a

“Indeed, over the last 15 years, this regime has shifted dramatically from simply limiting how much can be spent by candidates, to placing limits on spending, strengthening financial reporting rules and regulating individual contributions.”

This issue of The Parliamentarian looks at elections and voting reform in the Commonwealth as well as election networks, combatting terrorism and looking ahead to CHOGM 2015 in Malta.