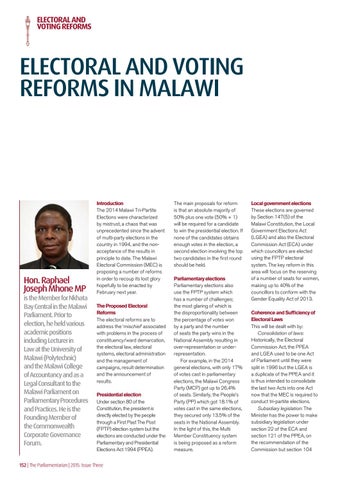 ELECTORAL AND VOTING REFORMS IN MALAWI

is the Member for Nkhata Bay Central in the Malawi Parliament. Prior to election, he held various academic positions including Lecturer in Law at the University of Malawi (Polytechnic) and the Malawi College of Accountancy and as a Legal Consultant to the Malawi Parliament on Parliamentary Procedures and Practices. He is the Founding Member of the Commonwealth Corporate Governance Forum.

Introduction The 2014 Malawi Tri-Partite Elections were characterized by mistrust, a chaos that was unprecedented since the advent of multi-party elections in the country in 1994, and the nonacceptance of the results in principle to date. The Malawi Electoral Commission (MEC) is proposing a number of reforms in order to recoup its lost glory hopefully to be enacted by February next year. The Proposed Electoral Reforms The electoral reforms are to address the ‘mischief’ associated with problems in the process of constituency/ward demarcation, the electoral law, electoral systems, electoral administration and the management of campaigns, result determination and the announcement of results. Presidential election Under section 80 of the Constitution, the president is directly elected by the people through a First Past The Post (FPTP) election system but the elections are conducted under the Parliamentary and Presidential Elections Act 1994 (PPEA).

The main proposals for reform is that an absolute majority of 50% plus one vote (50% + 1) will be required for a candidate to win the presidential election. If none of the candidates obtains enough votes in the election, a second election involving the top two candidates in the first round should be held. Parliamentary elections Parliamentary elections also use the FPTP system which has a number of challenges; the most glaring of which is the disproportionality between the percentage of votes won by a party and the number of seats the party wins in the National Assembly resulting in over-representation or underrepresentation. For example, in the 2014 general elections, with only 17% of votes cast in parliamentary elections, the Malawi Congress Party (MCP) got up to 26.4% of seats. Similarly, the People’s Party (PP) which got 18.1% of votes cast in the same elections, they secured only 13.5% of the seats in the National Assembly. In the light of this, the Multi Member Constituency system is being proposed as a reform measure.

Local government elections These elections are governed by Section 147(5) of the Malawi Constitution, the Local Government Elections Act (LGEA) and also the Electoral Commission Act (ECA) under which councillors are elected using the FPTP electoral system. The key reform in this area will focus on the reserving of a number of seats for women, making up to 40% of the councillors to conform with the Gender Equality Act of 2013. Coherence and Sufficiency of Electoral Laws This will be dealt with by: Consolidation of laws: Historically, the Electoral Commission Act, the PPEA and LGEA used to be one Act of Parliament until they were split in 1996 but the LGEA is a duplicate of the PPEA and it is thus intended to consolidate the last two Acts into one Act now that the MEC is required to conduct tri-partite elections. Subsidiary legislation: The Minister has the power to make subsidiary legislation under section 22 of the ECA and section 121 of the PPEA, on the recommendation of the Commission but section 104