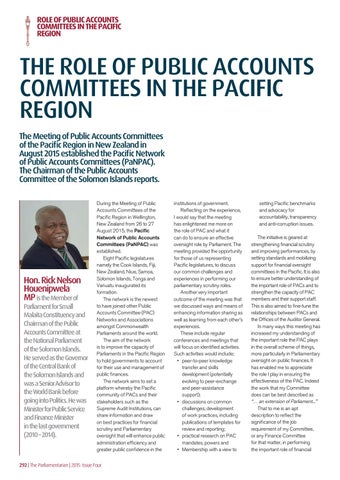 Role of Public Accounts Committees in the Pacific Region

Hon. Rick Nelson Houenipwela MP is the Member of

Parliament for Small Malaita Constituency and Chairman of the Public Accounts Committee at the National Parliament of the Solomon Islands. He served as the Governor of the Central Bank of the Solomon Islands and was a SeniorAdvisor to the World Bank before going into Politics. He was Minister for Public Service and Finance Minister in the last government (2010 – 2014).

During the Meeting of Public Accounts Committees of the Pacific Region in Wellington, New Zealand from 26 to 27 August 2015, the Pacific Network of Public Accounts Committees (PaNPAC) was established. Eight Pacific legislatures namely the Cook Islands, Fiji, New Zealand, Niue, Samoa, Solomon Islands, Tonga and Vanuatu inaugurated its formation. The network is the newest to have joined other Public Accounts Committee (PAC) Networks and Associations amongst Commonwealth Parliaments around the world. The aim of the network is to improve the capacity of Parliaments in the Pacific Region to hold governments to account for their use and management of public finances. The network aims to set a platform whereby the Pacific community of PACs and their stakeholders such as the Supreme Audit Institutions, can share information and draw on best practices for financial scrutiny and Parliamentary oversight that will enhance public administration efficiency and greater public confidence in the

institutions of government. Reflecting on the experience, I would say that the meeting has enlightened me more on the role of PAC and what it can do to ensure an effective oversight role by Parliament. The meeting provided the opportunity for those of us representing Pacific legislatures, to discuss our common challenges and experiences in performing our parliamentary scrutiny roles. Another very important outcome of the meeting was that we discussed ways and means of enhancing information sharing as well as learning from each other’s experiences. These include regular conferences and meetings that will focus on identified activities. Such activities would include; • peer-to-peer knowledge transfer and skills development (potentially evolving to peer-exchange and peer-assistance support); • discussions on common challenges; development of work practices, including publications of templates for review and reporting; • practical research on PAC mandates, powers and • Membership with a view to

setting Pacific benchmarks and advocacy for accountability, transparency and anti-corruption issues. The initiative is geared at strengthening financial scrutiny and improving performances, by setting standards and mobilizing support for financial oversight committees in the Pacific. It is also to ensure better understanding of the important role of PACs and to strengthen the capacity of PAC members and their support staff. This is also aimed to fine-tune the relationships between PACs and the Offices of the Auditor General. In many ways this meeting has increased my understanding of the important role the PAC plays in the overall scheme of things, more particularly in Parliamentary oversight on public finances. It has enabled me to appreciate the role I play in ensuring the effectiveness of the PAC. Indeed the work that my Committee does can be best described as “… an extension of Parliament...” That to me is an apt description to reflect the significance of the job requirement of my Committee, or any Finance Committee for that matter, in performing the important role of financial