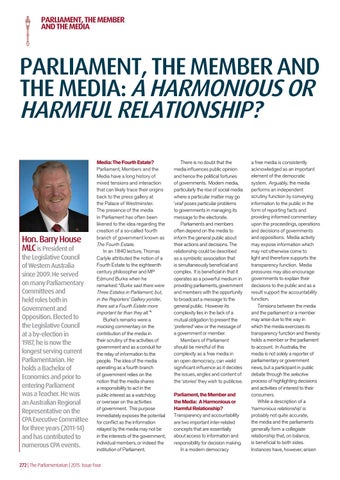 Parliament, the Member and the Media

Parliament, the Member and the Media: A Harmonious or Harmful Relationship?

the Legislative Council of Western Australia since 2009. He served on many Parliamentary Committees and held roles both in Government and Opposition. Elected to the Legislative Council at a by-election in 1987, he is now the longest serving current Parliamentarian. He holds a Bachelor of Economics and prior to entering Parliament was a Teacher. He was an Australian Regional Representative on the CPA Executive Committee for three years (2011-14) and has contributed to numerous CPA events.

Media: The Fourth Estate? Parliament, Members and the Media have a long history of mixed tensions and interaction that can likely trace their origins back to the press gallery at the Palace of Westminster. The presence of the media in Parliament has often been likened to the idea regarding the creation of a so-called fourth branch of government known as The Fourth Estate. In an 1840 lecture, Thomas Carlyle attributed the notion of a Fourth Estate to the eighteenth century philosopher and MP Edmund Burke when he remarked: “Burke said there were Three Estates in Parliament; but, in the Reporters’ Gallery yonder, there sat a Fourth Estate more important far than they all.”1 Burke’s remarks were a mocking commentary on the contribution of the media in their scrutiny of the activities of government and as a conduit for the relay of information to the people. The idea of the media operating as a fourth branch of government relies on the notion that the media shares a responsibility to act in the public interest as a watchdog or overseer on the activities of government. This purpose immediately exposes the potential for conflict as the information relayed by the media may not be in the interests of the government; individual members, or indeed the institution of Parliament.

There is no doubt that the media influences public opinion and hence the political fortunes of governments. Modern media, particularly the rise of social media where a particular matter may go ‘viral’ poses particular problems to governments in managing its message to the electorate. Parliaments and members often depend on the media to inform the general public about their actions and decisions. The relationship could be described as a symbiotic association that is simultaneously beneficial and complex. It is beneficial in that it operates as a powerful medium in providing parliaments, government and members with the opportunity to broadcast a message to the general public. However its complexity lies in the lack of a mutual obligation to present the ‘preferred’ view or the message of a government or member. Members of Parliament should be mindful of this complexity as a free media in an open democracy, can wield significant influence as it decides the issues, angles and content of the ‘stories’ they wish to publicise. Parliament, the Member and the Media: A Harmonious or Harmful Relationship? Transparency and accountability are two important inter-related concepts that are essentially about access to information and responsibility for decision making. In a modern democracy

a free media is consistently acknowledged as an important element of the democratic system. Arguably, the media performs an independent scrutiny function by conveying information to the public in the form of reporting facts and providing informed commentary upon the proceedings, operations and decisions of governments and oppositions. Media activity may expose information which may not otherwise come to light and therefore supports the transparency function. Media pressures may also encourage governments to explain their decisions to the public and as a result support the accountability function. Tensions between the media and the parliament or a member may arise due to the way in which the media exercises its transparency function and thereby holds a member or the parliament to account. In Australia, the media is not solely a reporter of parliamentary or government news, but a participant in public debate through the selective process of highlighting decisions and activities of interest to their consumers. While a description of a ‘harmonious relationship’ is probably not quite accurate, the media and the parliaments generally form a collegiate relationship that, on balance, is beneficial to both sides. Instances have, however, arisen