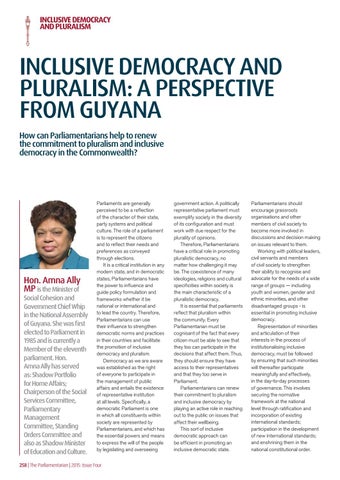 Inclusive Democracy and Pluralism: A Perspective from GUYANA How can Parliamentarians help to renew the commitment to pluralism and inclusive democracy in the Commonwealth?

Hon. Amna Ally MP is the Minister of

Social Cohesion and Government Chief Whip in the National Assembly of Guyana. She was first elected to Parliament in 1985 and is currently a Member of the eleventh parliament. Hon. Amna Ally has served as: Shadow Portfolio for Home Affairs; Chairperson of the Social Services Committee, Parliamentary Management Committee, Standing Orders Committee and also as Shadow Minister of Education and Culture.

Parliaments are generally perceived to be a reflection of the character of their state, party systems and political culture. The role of a parliament is to represent the citizens and to reflect their needs and preferences as conveyed through elections. It is a critical institution in any modern state, and in democratic states, Parliamentarians have the power to influence and guide policy formulation and frameworks whether it be national or international and to lead the country. Therefore, Parliamentarians can use their influence to strengthen democratic norms and practices in their countries and facilitate the promotion of inclusive democracy and pluralism. Democracy as we are aware was established as the right of everyone to participate in the management of public affairs and entails the existence of representative institution at all levels. Specifically, a democratic Parliament is one in which all constituents within society are represented by Parliamentarians, and which has the essential powers and means to express the will of the people by legislating and overseeing

government action. A politically representative parliament must exemplify society in the diversity of its configuration and must work with due respect for the plurality of opinions. Therefore, Parliamentarians have a critical role in promoting pluralistic democracy, no matter how challenging it may be. The coexistence of many ideologies, religions and cultural specificities within society is the main characteristic of a pluralistic democracy. It is essential that parliaments reflect that pluralism within the community. Every Parliamentarian must be cognisant of the fact that every citizen must be able to see that they too can participate in the decisions that affect them. Thus, they should ensure they have access to their representatives and that they too serve in Parliament. Parliamentarians can renew their commitment to pluralism and inclusive democracy by playing an active role in reaching out to the public on issues that affect their wellbeing. This sort of inclusive democratic approach can be efficient in promoting an inclusive democratic state.

Parliamentarians should encourage grassroots organisations and other members of civil society to become more involved in discussions and decision making on issues relevant to them. Working with political leaders, civil servants and members of civil society to strengthen their ability to recognise and advocate for the needs of a wide range of groups — including youth and women, gender and ethnic minorities, and other disadvantaged groups - is essential in promoting inclusive democracy. Representation of minorities and articulation of their interests in the process of institutionalising inclusive democracy, must be followed by ensuring that such minorities will thereafter participate meaningfully and effectively, in the day-to-day processes of governance. This involves securing the normative framework at the national level through ratification and incorporation of existing international standards; participation in the development of new international standards; and enshrining them in the national constitutional order.