The Parliamentarian 2022: Issue One: Reflecting on two years of the COVID-19 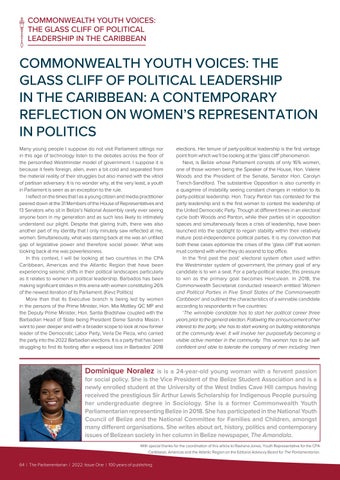 COMMONWEALTH YOUTH VOICES: THE GLASS CLIFF OF POLITICAL LEADERSHIP IN THE CARIBBEAN

COMMONWEALTH YOUTH VOICES: THE GLASS CLIFF OF POLITICAL LEADERSHIP IN THE CARIBBEAN: A CONTEMPORARY REFLECTION ON WOMEN’S REPRESENTATION IN POLITICS Many young people I suppose do not visit Parliament sittings nor in this age of technology listen to the debates across the floor of the personified Westminster model of government. I suppose it is because it feels foreign, alien, even a bit cold and separated from the material reality of their struggles but also marred with the vitriol of partisan adversary. It is no wonder why, at the very least, a youth in Parliament is seen as an exception to the rule. I reflect on the times that I as a young citizen and media practitioner peered down at the 31 Members of the House of Representatives and 13 Senators who sit in Belize’s National Assembly rarely ever seeing anyone born in my generation and as such less likely to intimately understand our plight. Despite that glaring truth, there was also another part of my identity that I only minutely saw reflected at me, women. Simultaneously, what was staring back at me was an unfilled gap of legislative power and therefore social power. What was looking back at me was powerlessness. In this context, I will be looking at two countries in the CPA Caribbean, Americas and the Atlantic Region that have been experiencing seismic shifts in their political landscapes particularly as it relates to women in political leadership. Barbados has been making significant strides in this arena with women constituting 26% of the newest iteration of its Parliament. (Kevz Politics) More than that its Executive branch is being led by women in the persons of the Prime Minister, Hon. Mia Mottley QC MP and the Deputy Prime Minister, Hon. Santia Bradshaw coupled with the Barbadian Head of State being President Dame Sandra Mason. I want to peer deeper and with a broader scope to look at now former leader of the Democratic Labor Party, Verla De Pieza, who carried the party into the 2022 Barbadian elections. It is a party that has been struggling to find its footing after a wipeout loss in Barbados’ 2018

elections. Her tenure of party-political leadership is the first vantage point from which we’ll be looking at the ‘glass cliff’ phenomenon. Next, is Belize whose Parliament consists of only 16% women, one of those women being the Speaker of the House, Hon. Valerie Woods and the President of the Senate, Senator Hon. Carolyn Trench-Sandiford. The substantive Opposition is also currently in a quagmire of instability seeing constant changes in relation to its party-political leadership. Hon. Tracy Panton has contested for the party leadership and is the first woman to contest the leadership of the United Democratic Party. Though at different times in an electoral cycle both Woods and Panton, while their parties sit in opposition spaces and simultaneously faces a crisis of leadership, have been launched into the spotlight to regain stability within their relatively mature post-independence political parties. It is my conviction that both these cases epitomize the crises of the ‘glass cliff’ that women must contend with when they do ascend to top office. In the ‘first past the post’ electoral system often used within the Westminster system of government, the primary goal of any candidate is to win a seat. For a party-political leader, this pressure to win as the primary goal becomes Herculean. In 2018, the Commonwealth Secretariat conducted research entitled ‘Women and Political Parties in Five Small States of the Commonwealth Caribbean’ and outlined the characteristics of a winnable candidate according to respondents in five countries: ‘The winnable candidate has to start her political career three years prior to the general election. Following the announcement of her interest to the party, she has to start working on building relationships at the community level. It will involve her purposefully becoming a visible active member in the community. This woman has to be selfconfident and able to tolerate the company of men including ‘men

is is a 24-year-old young woman with a fervent passion for social policy. She is the Vice President of the Belize Student Association and is a newly enrolled student at the University of the West Indies Cave Hill campus having received the prestigious Sir Arthur Lewis Scholarship for Indigenous People pursuing her undergraduate degree in Sociology. She is a former Commonwealth Youth Parliamentarian representing Belize in 2018. She has participated in the National Youth Council of Belize and the National Committee for Families and Children, amongst many different organisations. She writes about art, history, politics and contemporary issues of Belizean society in her column in Belize newspaper, The Amandala. With special thanks for the coordination of this article to Rashana Jones, Youth Representative for the CPA Caribbean, Americas and the Atlantic Region on the Editorial Advisory Board for The Parliamentarian.

The Parliamentarian 2022: Issue One: Reflecting on two years of the COVID-19

Articles from The Parliamentarian 2022: Issue One: Reflecting on two years of the COVID-19 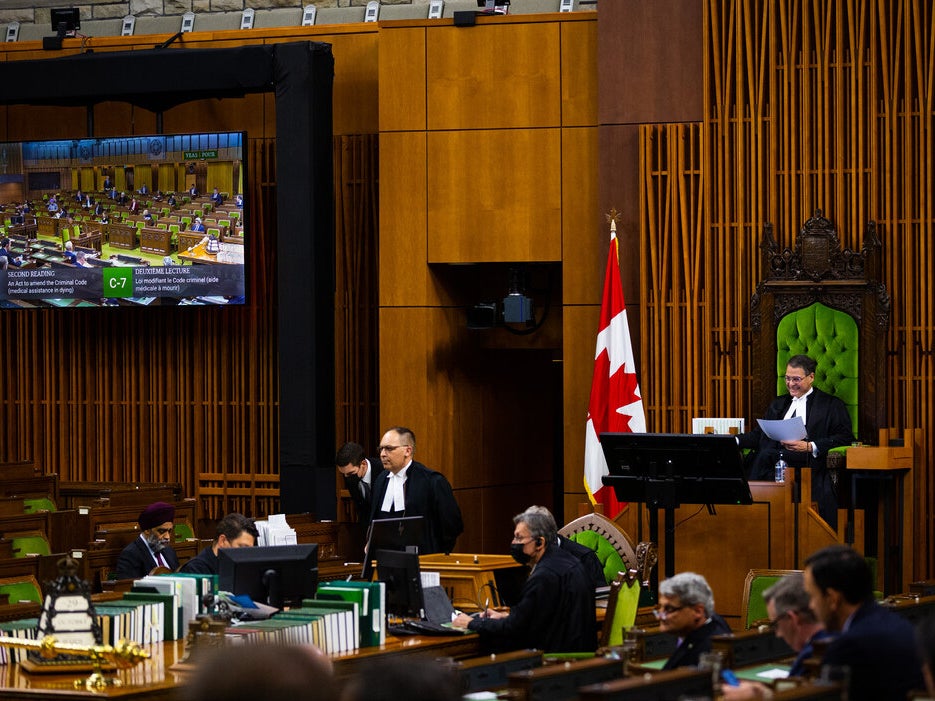 Reflecting on two years of COVID-19 in the Canadian Parliament

The Speaker of the Canadian House of Commons 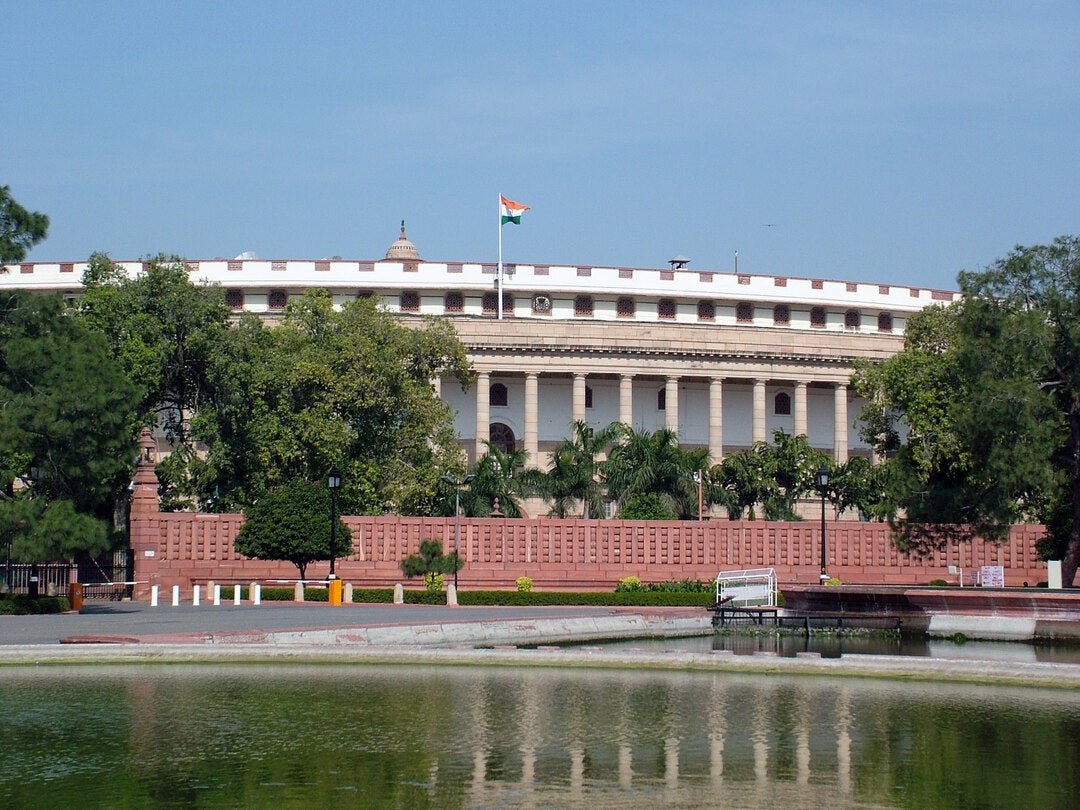 Reflecting on two years of COVID-19 in the India Parliament

The Speaker of Lok Sabha. 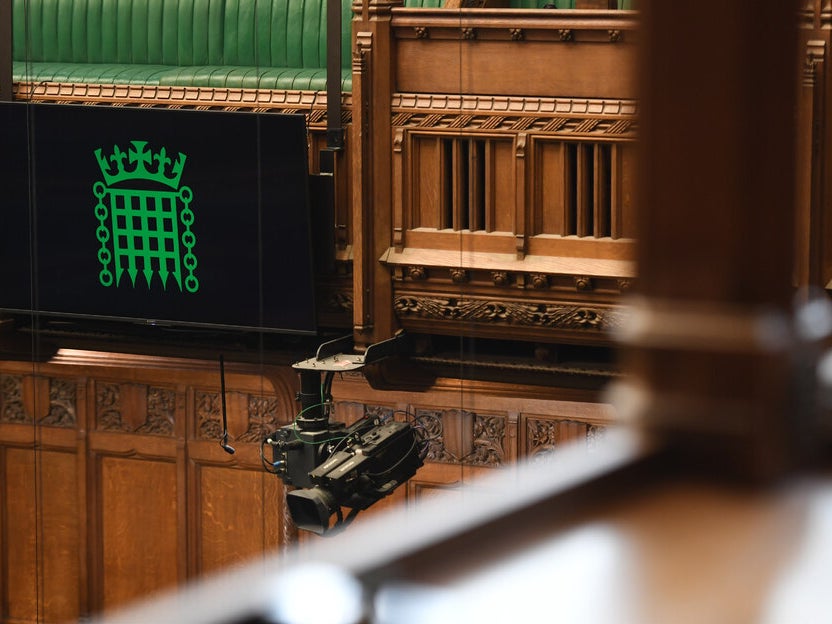 Reflecting on two years of COVID-19 in the UK Parliament

The Chair of the UK House of Commons Procedure Committee looks back over the last two years.