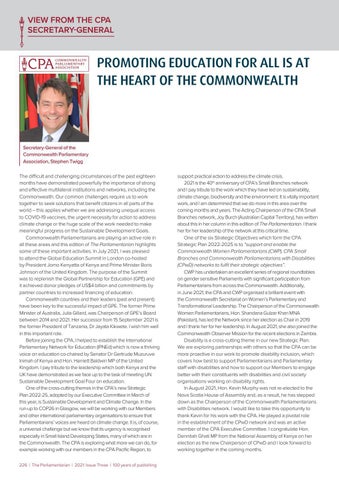 VIEW FROM THE CPA SECRETARY-GENERAL

PROMOTING EDUCATION FOR ALL IS AT THE HEART OF THE COMMONWEALTH

Secretary-General of the Commonwealth Parliamentary Association, Stephen Twigg The difficult and challenging circumstances of the past eighteen months have demonstrated powerfully the importance of strong and effective multilateral institutions and networks, including the Commonwealth. Our common challenges require us to work together to seek solutions that benefit citizens in all parts of the world – this applies whether we are addressing unequal access to COVID-19 vaccines, the urgent necessity for action to address climate change or the huge scale of the work needed to make meaningful progress on the Sustainable Development Goals. Commonwealth Parliamentarians are playing an active role in all these areas and this edition of The Parliamentarian highlights some of these important activities. In July 2021, I was pleased to attend the Global Education Summit in London co-hosted by President Jomo Kenyatta of Kenya and Prime Minister Boris Johnson of the United Kingdom. The purpose of the Summit was to replenish the Global Partnership for Education (GPE) and it achieved donor pledges of US$4 billion and commitments by partner countries to increased financing of education. Commonwealth countries and their leaders (past and present) have been key to the successful impact of GPE. The former Prime Minister of Australia, Julia Gillard, was Chairperson of GPE’s Board between 2014 and 2021. Her successor from 15 September 2021 is the former President of Tanzania, Dr Jayata Kikwete. I wish him well in this important role. Before joining the CPA, I helped to establish the International Parliamentary Network for Education (IPNEd) which is now a thriving voice on education co-chaired by Senator Dr Gertrude Muzuruve Inimah of Kenya and Hon. Harriett Baldwin MP of the United Kingdom. I pay tribute to the leadership which both Kenya and the UK have demonstrated as we face up to the task of meeting UN Sustainable Development Goal Four on education. One of the cross-cutting themes in the CPA’s new Strategic Plan 2022-25, adopted by our Executive Committee in March of this year, is Sustainable Development and Climate Change. In the run-up to COP26 in Glasgow, we will be working with our Members and other international parliamentary organisations to ensure that Parliamentarians’ voices are heard on climate change. It is, of course, a universal challenge but we know that its urgency is recognised especially in Small Island Developing States, many of which are in the Commonwealth. The CPA is exploring what more we can do, for example working with our members in the CPA Pacific Region, to 226 | The Parliamentarian | 2021: Issue Three | 100 years of publishing

support practical action to address the climate crisis. 2021 is the 40th anniversary of CPA’s Small Branches network and I pay tribute to the work which they have led on sustainability, climate change, biodiversity and the environment. It is vitally important work, and I am determined that we do more in this area over the coming months and years. The Acting Chairperson of the CPA Small Branches network, Joy Burch (Australian Capital Territory), has written about this in her column in this edition of The Parliamentarian. I thank her for her leadership of the network at this critical time. One of the six Strategic Objectives which form the CPA Strategic Plan 2022-2025 is to “support and enable the Commonwealth Women Parliamentarians (CWP), CPA Small Branches and Commonwealth Parliamentarians with Disabilities (CPwD) networks to fulfil their strategic objectives”. CWP has undertaken an excellent series of regional roundtables on gender sensitive Parliaments with significant participation from Parliamentarians from across the Commonwealth. Additionally, in June 2021, the CPA and CWP organised a brilliant event with the Commonwealth Secretariat on Women’s Parliamentary and Transformational Leadership. The Chairperson of the Commonwealth Women Parliamentarians, Hon. Shandana Gulzar Khan MNA (Pakistan), has led the Network since her election as Chair in 2019 and I thank her for her leadership. In August 2021, she also joined the Commonwealth Observer Mission for the recent elections in Zambia. Disability is a cross-cutting theme in our new Strategic Plan. We are exploring partnerships with others so that the CPA can be more proactive in our work to promote disability inclusion, which covers how best to support Parliamentarians and Parliamentary staff with disabilities and how to support our Members to engage better with their constituents with disabilities and civil society organisations working on disability rights. In August 2021, Hon. Kevin Murphy was not re-elected to the Nova Scotia House of Assembly and, as a result, he has stepped down as the Chairperson of the Commonwealth Parliamentarians with Disabilities network. I would like to take this opportunity to thank Kevin for his work with the CPA. He played a pivotal role in the establishment of the CPwD network and was an active member of the CPA Executive Committee. I congratulate Hon. Dennitah Ghati MP from the National Assembly of Kenya on her election as the new Chairperson of CPwD and I look forward to working together in the coming months. 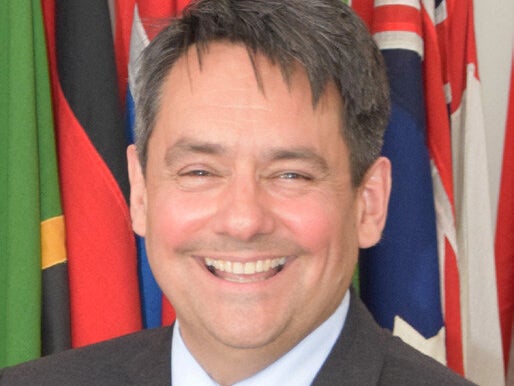 Promoting Education for all is at the heart of the Commonwealth

Looking ahead to COP26: Why Parliamentarians are integral to the fight against climate change 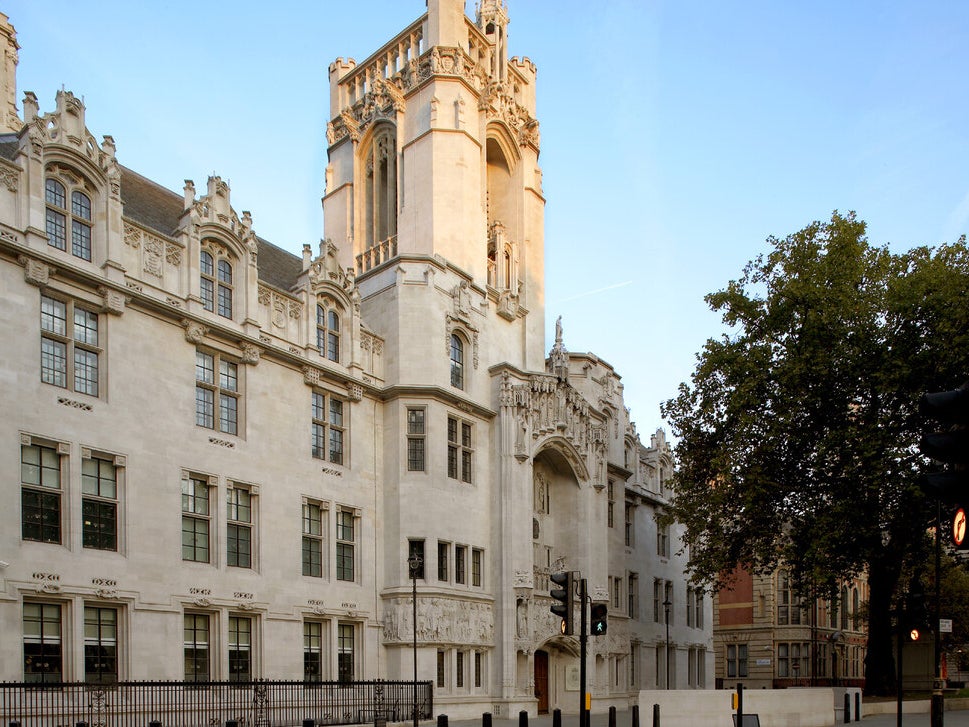 The UK Supreme Court: What is its relationship with the UK Parliament?

The President of the UK Supreme Court outlines the role of the highest court in the UK.