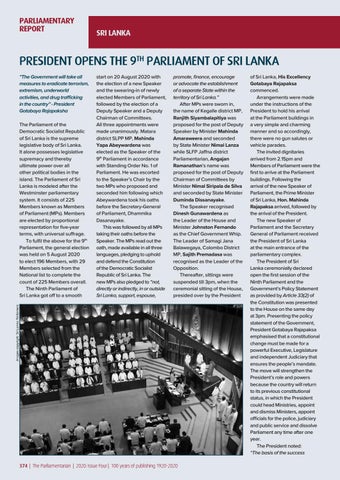 PRESIDENT OPENS THE 9TH PARLIAMENT OF SRI LANKA “The Government will take all measures to eradicate terrorism, extremism, underworld activities, and drug trafficking in the country” - President Gotabaya Rajapaksha

promote, finance, encourage or advocate the establishment of a separate State within the territory of Sri Lanka.” After MPs were sworn in, the name of Kegalle district MP, Ranjith Siyambalapitiya was proposed for the post of Deputy Speaker by Minister Mahinda Amaraweera and seconded by State Minister Nimal Lanza while SLFP Jaffna district Parliamentarian, Angajan Ramanathan’s name was proposed for the post of Deputy Chairman of Committees by Minister Nimal Siripala de Silva and seconded by State Minister Duminda Dissanayake. The Speaker recognised Dinesh Gunawardena as the Leader of the House and Minister Johnston Fernando as the Chief Government Whip. The Leader of Samagi Jana Balawegaya, Colombo District MP, Sajith Premadasa was recognised as the Leader of the Opposition. Thereafter, sittings were suspended till 3pm, when the ceremonial sitting of the House, presided over by the President

The Parliament of the Democratic Socialist Republic of Sri Lanka is the supreme legislative body of Sri Lanka. It alone possesses legislative supremacy and thereby ultimate power over all other political bodies in the island. The Parliament of Sri Lanka is modeled after the Westminster parliamentary system. It consists of 225 Members known as Members of Parliament (MPs). Members are elected by proportional representation for five-year terms, with universal suffrage. To fulfil the above for the 9th Parliament, the general election was held on 5 August 2020 to elect 196 Members, with 29 Members selected from the National list to complete the count of 225 Members overall. The Ninth Parliament of Sri Lanka got off to a smooth

start on 20 August 2020 with the election of a new Speaker and the swearing-in of newly elected Members of Parliament, followed by the election of a Deputy Speaker and a Deputy Chairman of Committees. All three appointments were made unanimously. Matara district SLPP MP, Mahinda Yapa Abeywardena was elected as the Speaker of the 9th Parliament in accordance with Standing Order No. 1 of Parliament. He was escorted to the Speaker’s Chair by the two MPs who proposed and seconded him following which Abeywardena took his oaths before the Secretary-General of Parliament, Dhammika Dasanayake. This was followed by all MPs taking their oaths before the Speaker. The MPs read out the oath, made available in all three languages, pledging to uphold and defend the Constitution of the Democratic Socialist Republic of Sri Lanka. The new MPs also pledged to “not, directly or indirectly, in or outside Sri Lanka, support, espouse,

of Sri Lanka, His Excellency Gotabaya Rajapaksa commenced. Arrangements were made under the instructions of the President to hold his arrival at the Parliament buildings in a very simple and charming manner and so accordingly, there were no gun salutes or vehicle parades. The invited dignitaries arrived from 2.15pm and Members of Parliament were the first to arrive at the Parliament buildings. Following the arrival of the new Speaker of Parliament, the Prime Minister of Sri Lanka, Hon. Mahinda Rajapaksa arrived, followed by the arrival of the President. The new Speaker of Parliament and the Secretary General of Parliament received the President of Sri Lanka at the main entrance of the parliamentary complex. The President of Sri Lanka ceremonially declared open the first session of the Ninth Parliament and the Government’s Policy Statement as provided by Article 33(2) of the Constitution was presented to the House on the same day at 3pm. Presenting the policy statement of the Government, President Gotabaya Rajapaksa emphasised that a constitutional change must be made for a powerful Executive, Legislature and independent Judiciary that ensures the people’s mandate. The move will strengthen the President’s role and powers because the country will return to its previous constitutional status, in which the President could head Ministries, appoint and dismiss Ministers, appoint officials for the police, judiciary and public service and dissolve Parliament any time after one year. The President noted: “The basis of the success