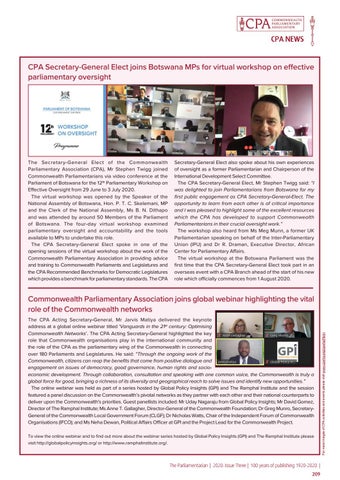 The CPA Acting Secretary-General, Mr Jarvis Matiya delivered the keynote address at a global online webinar titled 'Vanguards in the 21st century: Optimising Commonwealth Networks’. The CPA Acting Secretary-General highlighted the key role that Commonwealth organisations play in the international community and the role of the CPA as the parliamentary wing of the Commonwealth in connecting over 180 Parliaments and Legislatures. He said: “Through the ongoing work of the Commonwealth, citizens can reap the benefits that come from positive dialogue and engagement on issues of democracy, good governance, human rights and socioeconomic development. Through collaboration, consultation and speaking with one common voice, the Commonwealth is truly a global force for good, bringing a richness of its diversity and geographical reach to solve issues and identify new opportunities.” The online webinar was held as part of a series hosted by Global Policy Insights (GPI) and The Ramphal Institute and the session featured a panel discussion on the Commonwealth’s pivotal networks as they partner with each other and their national counterparts to deliver upon the Commonwealth's priorities. Guest panellists included: Mr Uday Nagaraju from Global Policy Insights; Mr David Gomez, Director of The Ramphal Institute; Ms Anne T. Gallagher, Director-General of the Commonwealth Foundation; Dr Greg Munro, SecretaryGeneral of the Commonwealth Local Government Forum (CLGF); Dr Nicholas Watts, Chair of the Independent Forum of Commonwealth Organisations (IFCO); and Ms Neha Dewan, Political Affairs Officer at GPI and the Project Lead for the Commonwealth Project. To view the online webinar and to find out more about the webinar series hosted by Global Policy Insights (GPI) and The Ramphal Institute please visit http://globalpolicyinsights.org/ or http://www.ramphalinstitute.org/.