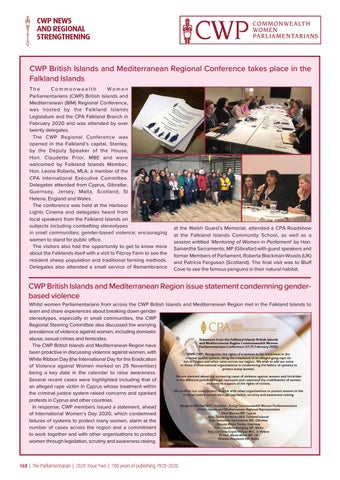 CWP British Islands and Mediterranean Regional Conference takes place in the Falkland Islands The Commonwealth Women Parliamentarians (CWP) British Islands and Mediterranean (BIM) Regional Conference, was hosted by the Falkland Islands Legislature and the CPA Falkland Branch in February 2020 and was attended by over twenty delegates. The CWP Regional Conference was opened in the Falkland’s capital, Stanley, by the Deputy Speaker of the House, Hon. Claudette Prior, MBE and were welcomed by Falkland Islands Member, Hon. Leona Roberts, MLA, a member of the CPA International Executive Committee. Delegates attended from Cyprus, Gibraltar, Guernsey, Jersey, Malta, Scotland, St Helena, England and Wales. The conference was held at the Harbour Lights Cinema and delegates heard from local speakers from the Falkland Islands on subjects including combatting stereotypes in small communities; gender-based violence; encouraging women to stand for public office. The visitors also had the opportunity to get to know more about the Falklands itself with a visit to Fitzroy Farm to see the resident sheep population and traditional farming methods. Delegates also attended a small service of Remembrance

at the Welsh Guard’s Memorial, attended a CPA Roadshow at the Falkland Islands Community School, as well as a session entitled ‘Mentoring of Women in Parliament’ by Hon. Samantha Sacramento, MP (Gibraltar) with guest speakers and former Members of Parliament, Roberta Blackman-Woods (UK) and Patricia Ferguson (Scotland). The final visit was to Bluff Cove to see the famous penguins in their natural habitat.

Whilst women Parliamentarians from across the CWP British Islands and Mediterranean Region met in the Falkland Islands to learn and share experiences about breaking down gender stereotypes, especially in small communities, the CWP Regional Steering Committee also discussed the worrying prevalence of violence against women, including domestic abuse, sexual crimes and femicides. The CWP British Islands and Mediterranean Region have been proactive in discussing violence against women, with White Ribbon Day (the International Day for the Eradication of Violence against Women marked on 25 November) being a key date in the calendar to raise awareness. Several recent cases were highlighted including that of an alleged rape victim in Cyprus whose treatment within the criminal justice system raised concerns and sparked protests in Cyprus and other countries. In response, CWP members issued a statement, ahead of International Women’s Day 2020, which condemned failures of systems to protect many women, alarm at the number of cases across the region and a commitment to work together and with other organisations to protect women through legislation, scrutiny and awareness raising.