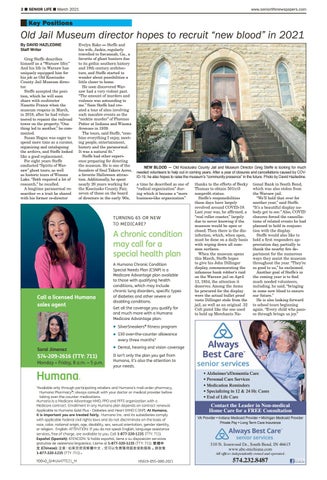 Old Jail Museum director hopes to recruit “new blood” in 2021 %\ &#39;$9,&#39; +$=/(&#39;,1( 6WDII :ULWHU Greg Steffe describes himself as a “Warsaw lifer.” And his life in Warsaw has uniquely equipped him for his job as Old Kosciusko County Jail Museum director. Steffe accepted the position, which he will soon share with co-director Nanette France when the museum reopens in March, in 2018, after he had volunteered to repaint the railroad tower on the property. “One thing led to another,” he commented. Susan Hogan was eager to spend more time as a curator, organizing and cataloguing the archive, and Steffe looked like a good replacement. For eight years Steffe conducted “Spirits of Warsaw” ghost tours, as well as historic tours of Winona Lake. “Both required a lot of research,” he recalled. A longtime paranormal researcher — a trait he shared with his former co-director

Evelyn Rake — Steffe and his wife, Jackie, regularly travelled to Savannah, Ga., a favorite of ghost hunters due to its gothic southern history and 19th century architecture, and Steffe started to wonder about possibilities a little closer to home. He soon discovered Warsaw had a very violent past. “The amount of murders and violence was astounding to me.” Soon Steffe had created a tour of sites involving such macabre events as the “necktie murder” of Florence Potter at Indiana and Winona Avenues in 1939. The tours, said Steffe, “combine everything I enjoy, meeting people, entertainment, history and the paranormal. It was a natural ﬁt.” Steffe had other experience preparing for directing the museum. He is one of the founders of Soul Takers Acres, a favorite Halloween attraction. Additionally, he spent nearly 20 years working for the Kosciusko County Fair, seven of those on the board of directors in the early ‘90s,

TURNING 65 OR NEW TO MEDICARE?

A chronic condition may call for a special health plan

thanks to the efforts of Becky Thomas to obtain 501(c)3 nonproﬁt status. Steffe’s responsibilities these days have largely revolved around COVID-19. Last year was, he afﬁrmed, a “real roller coaster,” largely due to never knowing if the museum would be open or closed. Then there is the disinfection, which, when open, must be done on a daily basis with wiping down all common surfaces. When the museum opens this March, Steffe hopes to give his John Dillinger display, commemorating the infamous bank robber’s raid on the Warsaw jail on April 13, 1934, the attention it deserves. Among the items he procured for the display were the actual bullet proof vests Dillinger stole from the jail, as well as an original .32 Colt pistol like the one used to hold up Merchants Na-

tional Bank in South Bend, which was also stolen from the Warsaw jail. “We’ll hold that over for another year,” said Steffe. “It’s a beautiful display nobody got to see.” Also, COVID closures forced the cancellations of related events he had planned to hold in conjunction with the display. Steffe would also like to hold a ﬁrst responders appreciation day, partially to thank the nearby ﬁre department for the numerous ways they assist the museum throughout the year. “They’re so good to us,” he exclaimed. Another goal of Steffe’s in the coming year is to ﬁnd much needed volunteers, including, he said, “bringing in some new blood to ensure our future.” He is also looking forward to school tours beginning again. “Every child who passes through brings us joy.”

• Dental, hearing and vision coverage It isn’t only the plan you get from Humana, it’s also the attention to your needs.