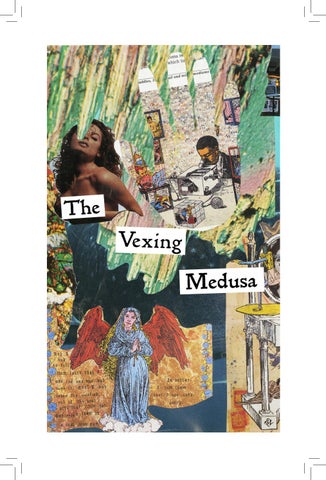 vex (verb) 1. to irritate; annoy; provoke 2.to torment; trouble; distress; plague; worry 3. to discuss or debate (a subject, question, etc.) with vigor or at great length 4. to disturb by motion; stir up; toss about 5. to afflict with physical pain DEAR READER, Sometimes medusas aren’t laughing: sometimes we’re vexing. We’ve had a lot on our minds lately – things that unsettle, disturb, and provoke us. This past year, we’ve wanted to challenge the status quo and expand representation within our own organization. We are proud to present a series of works that probe the structural standards of a literary magazine in hopes of inspiring a discussion regarding the myriad of personal narratives on campus. If something in this world vexes you, pick up a pen and submit to our zine next year. In the meantime, submit your polished literary fiction, poetry, and art to The Laughing Medusa – our 2020 spring publication – by emailing bclaughingmedusa@gmail.com.

in albuquerque the blood moon rises under this endless sea of red i take deep honeybreaths pluck platelets ripe and oxygenic full of fever and fear. fish twitch in the murky distance burrow in capillary mud. tumbleweeds sleepwalk into the silent milk river. a cactus floats on the still surface. swift&amp;carnivorous i sink my teeth into the skin thesuddenspikes tear flesh aside apart with waterswollen hands more and more and then of the heart, still-beating i take and take bloodhungry i pull i snatch i tear i swear and suck the plaque from veins godless lawless and fill my hungry mouth hot metallic raging ready with seeping pulp, saccharine promises embedded eloquent that ooze and dribble onto the soaking desert ground over my own throbbing aorta that has had enough. the carcass sinks. spikes descend into the mud slow &amp; soft &amp; silent. someday, when i finally wake to gray cadaver dawn arteries clogged waterlogged i wonder will i sink or swim? jennessa bryson

inquisitional someone mentions the history of the thing; it’s like we can see the aftermath of witches, colonization, the bare bones of an empire erupting out of blood. i try to say te amo and it comes out tasting like crushed plata mixed with zacate. i long for promises of maize and cacao spiced with cayenne. metallic and rust coat my gums, the realization that i’m as human as the witches tortured and tried by an inquisition that built the backbones of race. i dreamt up reversible gods and double meanings and metaphors. divine words scrawled onto blank slates and in the margins of antiquity. bare boned art and back braces in bathtubs. i see ancestry spilled in oil and tempera, a mezcla of mestiza and judía ichor on zinc. we lay waste to almost 300 years of history, watching it fold itself into tiny bite-sized chunks that will be eaten by the empires following the footsteps. the poetics of nerves and veins run rampant in the latin american imagination. i’ve had my veins ripped open and infested by conquistadors and rippling disease.

if i could paint you, i would carve out your hollows, curve your spine, sultrily stroke the shadows where light recedes, too timid to touch you, who is effervescent and divine, whose skin radiates heat so torrid and alluring that the ice caps are melting and habitats are being eradicated but the people remain dormant, because they would rather burn than rid the world of all that you contain. i cannot paint you for fear of injustice, of mistaken hues and fallible shape. i fear that your beauty will not translate to stillness, to a constant. you are a lightning flash of blink-and-youâ&amp;#x20AC;&amp;#x2122;ll-miss-it brilliance. if i were to try to replicate you, i would scorch canvas, burn the love letters of poets past and forge your figure from their ashes. i would pick plums and palm them in my hands, squeezing and splattering sticky innards across a porcelain surface until it runs, mauve and bloodied. i would write every lie iâ&amp;#x20AC;&amp;#x2122;ve ever told and pour a bottle of my perfume onto your image because every part of me is you. if i could paint you, i would, but ash, plum, and perfume cannot replicate your beauty â&amp;#x20AC;&amp;#x201D; apparent, ambiguous, and now. lexie slotterback

The Morning Of The steamy, white-yellow hotel lights sterilize me like a third shower of the morning and my mother goes at my hair with a black wide tooth comb, flossing it with my straw-spun webs, which resent touch and orderâ&amp;#x20AC;&amp;#x201D; and I let her pull apart every coagulated filthy tress with her hands and teeth. Examining my scalp, to lick and pick apart, she separates the difficult bits of me, as an animal tugs and straightens her young. And her daughter, in perfect compliance, observes this nauseating lost-ness of herself, by quieting the squirming,squealing child within who wishes to recoil and grunt at each brush stroke, because she knows, I know, my mom is the only one who can eat the hospital from my head. christin snyder

hardware today I swallowed a nail. it disintegrated in my stomach because it’s keratin and though it probably contains some bacteria from the library desks and definitely whatever shit is on my phone screen at least I stopped painting them so there’s no extra toxins — I’m trying to look out for my health. my therapist asks why I don’t wear socks on my hands while I sleep and I respond that it’s because I like cannibalism but it’s really because shit doesn’t work and also I’m in my twenties and even though I have baby dimples on my hands I still want to sleep like they do in noir films with lingerie and not with mittens on my palms and you should know better than to tell me that fucking solution and ALSO for the record mindfulness doesn’t make me think less about that extra unnecessary dangling flap of skin on my index finger which needs removal even though it’s already clotted with universal donor blood — o-negative that I should probably donate next month, so thanks for the reminder. my mom says to get acrylics to stop the scratching and picking because it costs money and I say it’s because I don’t like colored nail polish but really it’s that I am not going to be living on your money forever hopefully don’t you want me to get a job I know I’m an English major and I need to budget, god, and my friends say to put a band aid on it! which makes me laugh because why wouldn’t I just use scotch tape instead of wasting perfectly good canvas sticky cloth and Neosporin when someone with less probably needs it more and so then I say fuck this because it’s easier to swallow my own skin than to consider why I do it and I think I’d rather just write a poem and not use my index finger and bite the rest of my nail off instead and tape up my fingers now and maybe flatten my baby-dimpled knuckles and prepare for the next slice of hardware to slide down my throat. celia smithmier

We Used to Call It the Vaginacoligistâ&amp;#x20AC;&amp;#x2122;s Sometimes they penetrate you, plastically, with a batshit camera that tries to echolocate in your walls, and they press the very loudest keys on their computer louder than the gurgly-ness of your insides to manufacture photographs of your yonic pink. It is not at all like an episode of Magic School Bus but you can pretend that it is, that a frazzled red-haired woman is crawling into your womb and is impressed with the function of it. All her microscopic students can be pointing and oohing and aahing at the pristiness of your uterus, and the blooming of your vulva and if you like they can even sing some fallopian tunes...to cover up your shallow little pain noises, and the constant, constant clicking. Maybe, that will be enough, until hours later, when youâ&amp;#x20AC;&amp;#x2122;re deeply sore, and a lump of blue gel will fall out of you onto the sheets of your twin bed. christin snyder

Alone Forced into small talk with my roommate’s dad as she moved in freshman year, when I was still gripped in the iron clutch of new insecurities Not fitting in at a school where most students were tall, fit, assertive, well-to-do White where the lawns were perfectly Green and the lights and AC eternally On fueled by my 73k a year my parents’ life savings I did not appreciate his joke that I must’ve worked out my arms carrying all my stuff in myself wished my family lived as close — a thirty-minute drive thanked his kind offer of future help but feeling small, inadequate embarrassed about my shabby belongings skinny arms halting English Leave me alone. yinou shi

Yearning â&amp;#x20AC;&amp;#x153;In his hands I was a cup overflowing with thirst.â&amp;#x20AC;? - Eduardo C. Corral Water signs align with the arcana of cups, Wealth, overflowing wine, Mead in a golden chalice. I drank fermented honey From your open mouth. You poured obsidian elixir between My slick-wet lips, watched It dribble down my chin. Did you know how badly it burned? As my blood congealed in my spiderweb veins, I melted into the velvet Couch and waited for my body To turn to stone. There are nights I remain Awake, mouth locked open, Waiting for your glass to tilt And drip, drip, drip.

Bartering: An International Student Contemplates an English Major I would give a dandelion for some wiring neurons attuned to math a thistledown for a dime dollars for a Gold Pass a moonbeam for some breakfast I missed due to stress a ransom for a quiet mind that dwells on dreams less Gathering starlight pleased me You’ll be pleased and hungry then grew thick the mist mist of childish fancy with ticking time. Who’d pay for immigrant poetry? Dancing on the edge suited me Double majoring, perhaps. till I tread on the Jungle’s confines. Get real or get out. Wherefore am I here?

America don’t need losers. Perhaps I traded wrong. What I really need Is a grassroot for some courage Or better, a work visa A flask of berry mead strong. yinou shi

Ritual The moonlight strikes the group Of women dancing around, Hair as long as snakes that crawl Upon the darkened earth. Oh, blood-drenched goddess, Tell me why the midwife burned For her lavender sachets And birth-giving hands, For her jumps on the broom And her cauldron hot, Brimming with chamomile and mint, For digging her hands in the soil. Let me find the women In the ashes, draw the sword from the remains and march forward In gold-dipped armor, Where their ghosts still dance And the fire reaches The tops of the trees, Where we braid our hair with roots and snakes 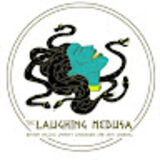