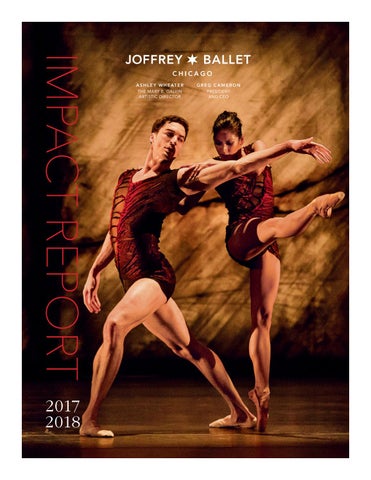 Above: The Joffrey Ballet in Midsummer Nightâ&#x20AC;&#x2122;s Dream. Photo by Cheryl Mann.

Dear Friends, As the curtain came down on Alexander Ekman’s Midsummer Night’s Dream to close the Joffrey’s 2017–2018 season, we were reminded that bold innovation is at the heart of what we do at the Joffrey. Our incredible trajectory over the last decade has exceeded expectations, and we are in a fortunate position to exceed them further still. This past year proved it. In the fall of 2017, on the eve of a historic collaboration with the Lyric Opera of Chicago, we announced our impending move to the Lyric Opera House in 2020—a partnership that Mayor Rahm Emanuel described as “two jewels in Chicago’s cultural crown” coming together to strengthen Chicago’s reputation as a “worldwide leader in impactful and groundbreaking artistic performances.”

That was just the beginning. The season officially opened with a criticallyacclaimed performance of Giselle, followed by the second year of Christopher Wheeldon’s magical reimagining of The Nutcracker. Our winter program—with classics by legends like George Balanchine and Jerome Robbins—showed that the Joffrey is among the most versatile companies in the world. And then there was the North American premiere of Midsummer Night’s Dream, a ballet unlike any other, that would go on to become one of the top three best-selling productions in Joffrey history. Chicago was not the only beneficiary of Joffrey joy. We wowed audiences during an unprecedented month-long residency at the Music Center in Los Angeles and dazzled at the Les Étés de la Danse festival in Paris alongside New York City Ballet—a reminder that our national and international influence is expanding rapidly. On the administrative side, we achieved new revenue milestones and received a transformational $5 million gift from the Paul Galvin Memorial Foundation Trust to establish The Mary B. Galvin Artistic Director position, ensuring that our leadership remains among the industry’s best well into the future. Generous grants from the Alphawood Foundation and the Elizabeth Morse Charitable Trust allowed us to hire four new full-time staff positions. Meanwhile, our Academy and Community Engagement programs continue to exceed enrollment goals and reach more students in the Chicago Public School system than at any point prior. Altogether, 2017–2018 will go down as one of our most successful seasons ever. It should come as no surprise. We are an organization of hundreds of dedicated individuals, a committed board of directors, exceptional artistic and executive leadership under Ashley Wheater and Greg Cameron, and world-class talent. The Joffrey has never been stronger, and the future has never looked brighter.

$346,460 COSTS AND DIRECT BENEFITS TO DONORS RELATED TO SPECIAL EVENTS

2017–2018 OPERATING RESULTS For the 5th consecutive year, the Joffrey’s operations generated a yearend surplus. Artistic excellence, audience development and strategic touring resulted in an increase of 28% in ticket sales and touring revenue. The Joffrey Academy of Dance experienced revenue growth of over 11% this past year thanks to continued strong enrollment and the addition of a new program. Funding received for Community Engagement activities provided enhanced programs for Chicago youth including two Nutcracker matinees offered to at no cost to students in Chicago Public Schools. In addition to positive operating activities, the Joffrey endowment received a gift of $5M to endow The Mary B. Galvin Artistic Director position. The Joffrey continues to embrace its strategic initiatives which have resulted in a clear road map focused on programmatic growth while remaining fiscally responsible.

Dara Holmes and Edson Barbosa in Body of Your Dreams. Photo by Cheryl Mann.

The Joffrey Ballet is grateful to our donors for providing funding that ensures quality and engaging experiences for a variety of audiences. The following is a list of donors who made gifts and pledges in support of the annual fund, special events, and projects in the amount of $1,000 or more between July 1, 2017 and June 30, 2018.

The Joffrey Ballet is grateful to our donors for providing funding that ensures quality and engaging experiences for a variety of audiences. The following is a list of those who made gifts and pledges in support of the annual fund, special events, and projects, in the amount of $1,000 or more, between July 1, 2017 and June 30, 2018.

Estate of Gary and Linda Blumenshine

Coco B. Meers and Ethan Meers

Gigi and James Owens at the Gala. Photo by Dan Rest.

Courtney A. Hoffmann and Sebastian Hoffmann

Lois Scott and David May

Hadas Teuscher and Josef Lakonishok at the Gala. Photo by Steve Becker.

Ethan and Coco Meers with Ashley Wheater at the Gala. Photo by Steve Becker.

Patti S. Eylar Over Patti Eylar’s three years as President, she is credited with leading the Joffrey Women’s Board to new heights: establishing a Costume Maintenance Fund for Christopher Wheeldon’s Nutcracker, adding dozens of new members, and inspiring fellow Women’s Board members to sponsor the program costs for Barton Elementary School, one of the 31 Chicago Public Schools participating in Joffrey Community Engagement in-school programming this season. The Joffrey Ballet is grateful for Patti’s leadership and commitment to always putting the mission of the Joffrey ﬁrst. Patti now serves as a Joffrey Board Director.

Above: Women’s Board President Patti S. Eylar posing with Joffrey Company Artists Christine Rocas and Amanda Assucena at Patti’s final Women’s Board Luncheon as President. In a conversation moderated by The Mary B. Galvin Artistic Director Ashley Wheater, Christine and Amanda spoke about learning the iconic role of Giselle and how their training from a young age has instilled the technique needed for this demanding lead role. As a dancer with Chicago City Ballet and Ballet Chicago from 1977–1995, Patti is uniquely attuned to the rigors of training and mental stamina necessary to perform works by the greatest choreographers.

Rose L. Shure Trust A generous bequest from longtime Joffrey supporter Mrs. Rose L. Shure has been dedicated to establish an endowed scholarship at the Joffrey Academy of Dance, in her name alongside her late husband’s. We are honored to celebrate their legacy by awarding the Rose L. Shure and Sidney N. Shure Endowed Scholarship to one of our most promising students each year, as they embody the Shures’ unwavering work ethic, determination, and commitment to arts education.

T  hrough the generosity of Alphawood Foundation Chicago and The Elizabeth Morse Charitable Trust, the Joffrey has been able to grow stronger as an organization and invest in our future. The groundbreaking $1 million grant from Alphawood Foundation Chicago supports a three-year audience development initiative which funds three new staff positions, invests in technology, and enables the Joffrey to deepen relationships with audiences resulting in repeat ticket purchases, subscriptions, and contributed revenue. By increasing audience sustainability, we will contribute long term to our own growth and financial viability. In the first year of the grant, we have already seen a fundamental transformation in how our marketing and development departments work together, greatly increasing our administration’s capabilities. A special gift from The Elizabeth Morse Charitable Trust funded the Joffrey’s first dedicated Planned Giving Officer. With a full-time professional devoted to building the program, we are beginning to implement a consistent planned giving strategy, growing the Joffrey’s sustainable sources of funding.

Gala Celebrating 10 Years of Visionary Leadership The Joffrey Gala served as a culminating event during the season-long celebration of visionary leadership from Ashley Wheater. Special thanks to Pam Strobel, former Joffrey Board Chair and CoChair of the Search Committee that brought Ashley to Chicago, for her generosity and stewardship in forming the Ashley Wheater Anniversary Leadership Group. The Joffrey is grateful to these individuals for their sustained support of the Joffrey, and especially of the artistic journey Ashley has planned during his tenure. Sandy and Roger Deromedi Pamella Roland DeVos and Daniel DeVos Anne L. Kaplan The Edward and Lucy R. Minor Family Foundation Bruce Sagan and Bette Cerf Hill Pam and Russ Strobel Mr. and Mrs. Ronald V. Waters III

Russ and Pam Strobel at the Gala. Photo by Dan Rest.

Ashley Wheater Day in Chicago “I, RAHM EMANUEL, MAYOR OF THE CITY OF CHICAGO, do hereby proclaim October 18, 2017, to be ASHLEY WHEATER DAY IN CHICAGO in acknowledgment of an extraordinary artist and arts champion, incomparable mentor and friend, and true Chicagoan.”

“My mother and our family have a deep love and appreciation for the Joffrey, which has ﬂourished under Ashley’s direction. We are so fortunate to be a part of its history, and we take immense pride knowing that the Joffrey leadership will remain the best in the world for years to come.” — Christopher Galvin

The following individuals have included The Joffrey Ballet in their estate plans and are members of the Star Society. The Joffrey thanks them for their lasting support.

The Marina and Arnold Tatar Fund for Live Music

Bill and Shelley Farley with Cindy and Chris Galvin at the Modern Masters Opening Night Dinner. Photo by Dan Rest.

The Estate of Linda and Gary Blumenshine

With gratitude to The Nutcracker Commissioning Sponsors

Margot and Josef Lakonishok Searle Funds at The Chicago Community Trust Hancher Auditorium, University of Iowa And the many “Believers” Nutcracker Student Matinees and Curriculum Sponsor

Additional rehearsal support for Beyond the Shore was provided by a Commission Initiative Grant from the New York Choreographic Institute, an affiliate of New York City Ballet.

Nuveen and the Nuveen Fund Board, in honor of Lorna Ferguson

Martha and Richard Melman with Suzanne and Albert Friedman

Victoria Jaiani in The Nutcracker. Photo by Cheryl Mann.

Board of Directors HONOR ARY CHAIRMAN

Women’s Board of The Joffrey Ballet OFFICERS

Members of the Searle Family on stage following The Nutcracker. Photo by Todd Rosenberg.

The Mary B. Galvin

Executive Assistant to the Executive Director

Students enrolled at the Joffrey Academy of Dance Photo by Cheryl Mann. 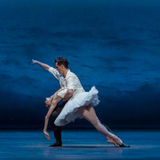