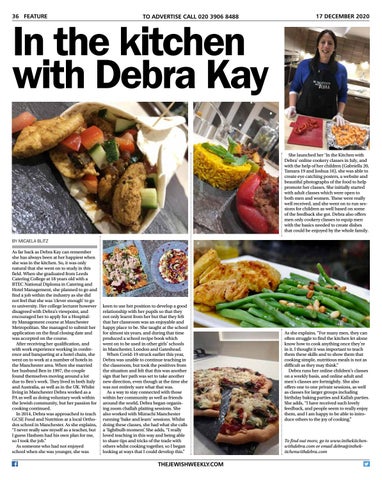 In the kitchen with Debra Kay

She launched her ‘In the Kitchen with Debra’ online cookery classes in July, and with the help of her children (Gabriella 20, Tamara 19 and Joshua 16), she was able to create eye catching posters, a website and beautiful photographs of the food to help promote her classes. She initially started with adult classes which were open to both men and women. These were really well received, and she went on to run sessions for children as well based on some of the feedback she got. Debra also offers men only cookery classes to equip men with the basics needed to create dishes that could be enjoyed by the whole family. BY MICAELA BLITZ As far back as Debra Kay can remember she has always been at her happiest when she was in the kitchen. So, it was only natural that she went on to study in this field. When she graduated from Leeds Catering College at 18 years old with a BTEC National Diploma in Catering and Hotel Management, she planned to go and find a job within the industry as she did not feel that she was ‘clever enough’ to go to university. Her college lecturer however disagreed with Debra’s viewpoint, and encouraged her to apply for a Hospitality Management course at Manchester Metropolitan. She managed to submit her application on the final closing date and was accepted on the course. After receiving her qualification, and with work experience working in conference and banqueting at a hotel chain, she went on to work at a number of hotels in the Manchester area. When she married her husband Ben in 1997, the couple found themselves moving around a lot due to Ben’s work. They lived in both Italy and Australia, as well as in the UK. Whilst living in Manchester Debra worked as a PA as well as doing voluntary work within the Jewish community, but her passion for cooking continued. In 2014, Debra was approached to teach GCSE Food and Nutrition at a local Orthodox school in Manchester. As she explains, “I never really saw myself as a teacher, but I guess Hashem had his own plan for me, so I took the job.” As someone who had not enjoyed school when she was younger, she was

keen to use her position to develop a good relationship with her pupils so that they not only learnt from her but that they felt that her classroom was an enjoyable and happy place to be. She taught at the school for almost six years, and during that time produced a school recipe book which went on to be used in other girls’ schools in Manchester, London and Gateshead. When Covid-19 struck earlier this year, Debra was unable to continue teaching in the classroom, but took the positives from the situation and felt that this was another sign that her path was set to take another new direction, even though at the time she was not entirely sure what that was. As a way to stay connected with those within her community as well as friends around the world, Debra began organising zoom challah plaiting sessions. She also worked with Mizrachi Manchester running ‘bake and learn’ sessions. Whilst doing these classes, she had what she calls a ‘lightbulb moment’. She adds, “I really loved teaching in this way and being able to share tips and tricks of the trade with others whilst cooking together, so I began looking at ways that I could develop this.”

As she explains, “For many men, they can often struggle to find the kitchen let alone know how to cook anything once they’re in it. I thought it was important to teach them these skills and to show them that cooking simple, nutritious meals is not as difficult as they may think.” Debra runs her online children’s classes on a weekly basis, and online adult and men’s classes are fortnightly. She also offers one to one private sessions, as well as classes for larger groups including birthday baking parties and Kallah parties. She adds, “I have received such lovely feedback, and people seem to really enjoy them, and I am happy to be able to introduce others to the joy of cooking.”

Jewish Newspaper in the UK

Jewish Newspaper in the UK