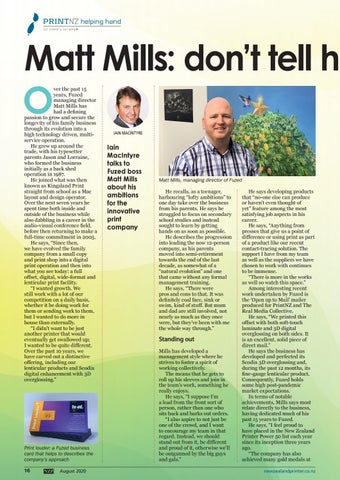 Matt Mills: don’t tell hi O ver the past 15 years, Fuzed managing director Matt Mills has had a defining passion to grow and secure the longevity of his family business through its evolution into a high technology driven, multiservice operation. He grew up around the trade, with his typesetter parents Jason and Lorraine, who formed the business initially as a back shed operation in 1987. He joined what was then known as Kingsland Print straight from school as a Mac layout and design operator. Over the next seven years he spent time both inside and outside of the business while also dabbling in a career in the audio-visual conference field, before then returning to make a full-time commitment in 2005. He says, “Since then, we have evolved the family company from a small copy and print shop into a digital print operation and then into what you see today: a full offset, digital, wide-format and lenticular print facility. “I wanted growth. We still work with a lot of our competition on a daily basis, whether it be doing work for them or sending work to them, but I wanted to do more in house than externally. “I didn’t want to be just another printer that would eventually get swallowed up; I wanted to be quite different. Over the past 10 years, we have carved out a distinctive offering, including our lenticular products and Scodix digital enhancement with 3D overglossing.”

Print louder: a Fuzed business card that helps to describes the company’s approach 16

Matt Mills, managing director of Fuzed He recalls, as a teenager, harbouring “lofty ambitions” to one day take over the business from his parents. He says he struggled to focus on secondary school studies and instead sought to learn by getting hands on as soon as possible. He describes the progression into leading the now 12-person company, as his parents moved into semi-retirement towards the end of the last decade, as somewhat of a “natural evolution” and one that came without any formal management training. He says, “There were pros and cons to that. It was definitely coal face, sink or swim, kind of stuff. But mum and dad are still involved, not nearly as much as they once were, but they’ve been with me the whole way through.”

Standing out Mills has developed a management style where he strives to foster a spirit of working collectively. The means that he gets to roll up his sleeves and join in the team’s work, something he really enjoys. He says, “I suppose I’m a lead from the front sort of person, rather than one who sits back and barks out orders. “I also aspire to not just be one of the crowd, and I want to encourage my team in that regard. Instead, we should stand out from it, be different and proud of it, otherwise we’ll be outgunned by the big guys and gals.”

He says developing products that “no-one else can produce or haven’t even thought of yet” feature among the most satisfying job aspects in his career. He says, “Anything from presses that give us a point of difference or using print as part of a product like our recent contact-tracing solution. The support I have from my team as well as the suppliers we have chosen to work with continues to be immense. “There is more in the works as well so watch this space.” Among interesting recent work undertaken by Fuzed is the ‘Open up to Mail’ mailer produced for PrintNZ and The Real Media Collective. He says, “We printed this offset with both soft-touch laminate and 3D digital overglossing on both sides. It is an excellent, solid piece of direct mail.” He says the business has developed and perfected its Scodix 3D overglossing and, during the past 12 months, its fine-gauge lenticular product. Consequently, Fuzed holds some high post-pandemic market expectations. In terms of notable achievements, Mills says most relate directly to the business, having dedicated much of his past 15 years to Fuzed. He says, “I feel proud to have placed in the New Zealand Printer Power 50 list each year since its inception three years ago. “The company has also achieved many gold medals at

New Zealand Printer has delivered the industry's news, technology advances, business developments, and significant relationships for the past 32 years. As industry sectors have evolved, NZP has continued to seek out and reveal the trends that matter to industry professionals including the rise of digital technology, the growth of package printing and the expansion in signage and textile printing. As a comprehensive and authoritative source of all the information that matters to the industry, New Zealand Printer has no peer. For print, packaging and signage professionals needing to know more about the direction their sector will head and who has the solutions, New Zealand Printer, the nation's only dedicated print magazine, delivers time and again.