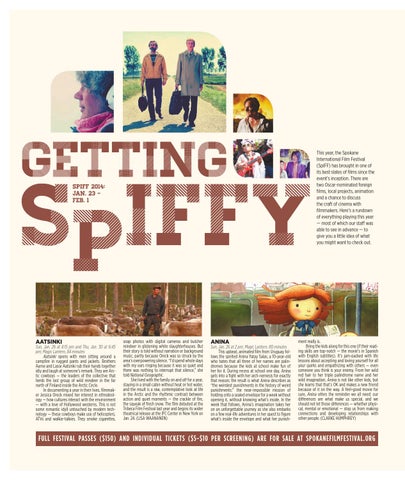 This year, the Spokane International Film Festival (SpIFF) has brought in one of its best slates of films since the event’s inception. There are two Oscar-nominated foreign films, local projects, animation and a chance to discuss the craft of cinema with filmmakers. Here’s a rundown of everything playing this year — most of which our staff was able to see in advance — to give you a little idea of what you might want to check out.

Sun, Jan. 26 at 4:15 pm and Thu, Jan. 30 at 6:45 pm; Magic Lantern, 84 minutes Aatsinki opens with men sitting around a campfire in rugged pants and jackets. Brothers Aarne and Lasse Aatsinki rub their hands together idly and laugh at someone’s remark. They are Arctic cowboys — the leaders of the collective that herds the last group of wild reindeer in the far north of Finland inside the Arctic Circle. In documenting a year in their lives, filmmaker Jessica Oreck mixed her interest in ethnobiology — how cultures interact with the environment — with a love of Hollywood westerns. This is not some romantic idyll untouched by modern technology — these cowboys make use of helicopters, ATVs and walkie-talkies. They smoke cigarettes,

snap photos with digital cameras and butcher reindeer in glistening white slaughterhouses. But their story is told without narration or background music, partly because Oreck was so struck by the area’s overpowering silence. “I’d spend whole days with my ears ringing because it was so quiet and there was nothing to interrupt that silence,” she told National Geographic. She lived with the family on and off for a year, staying in a small cabin without heat or hot water, and the result is a raw, contemplative look at life in the Arctic and the rhythmic contrast between action and quiet moments — the crackle of fire, the squeak of fresh snow. The film debuted at the Tribeca Film Festival last year and begins its wider theatrical release at the IFC Center in New York on Jan. 24. (LISA WAANANEN)

Sun, Jan. 26 at 2 pm; Magic Lantern, 80 minutes This upbeat, animated film from Uruguay follows the spirited Anina Yatay Salas, a 10-year-old who hates that all three of her names are palindromes because the kids at school make fun of her for it. During recess at school one day, Anina gets into a fight with her arch-nemesis for exactly that reason; the result is what Anina describes as “the weirdest punishments in the history of weird punishments:” the near-impossible mission of holding onto a sealed envelope for a week without opening it, without knowing what’s inside. In the week that follows, Anina’s imagination takes her on an unforgettable journey as she also embarks on a few real-life adventures in her quest to figure what’s inside the envelope and what her punish-

ment really is. Bring the kids along for this one (if their reading skills are top-notch — the movie’s in Spanish with English subtitles). It’s jam-packed with life lessons about accepting and loving yourself for all your quirks and empathizing with others — even someone you think is your enemy. From her wild red hair to her triple palindrome name and her wild imagination, Anina is not like other kids, but she learns that that’s OK and makes a new friend because of it on the way. A feel-good movie for sure, Anina offers the reminder we all need: our differences are what make us special, and we should not let those differences — whether physical, mental or emotional — stop us from making connections and developing relationships with other people. (CLARKE HUMPHREY)

FULL FESTIVAL PASSES ($150) AND INDIVIDUAL TICKETS ($5-$10 PER SCREENING) ARE FOR SALE AT SPOKANEFILMFESTIVAL.ORG 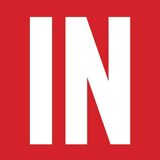